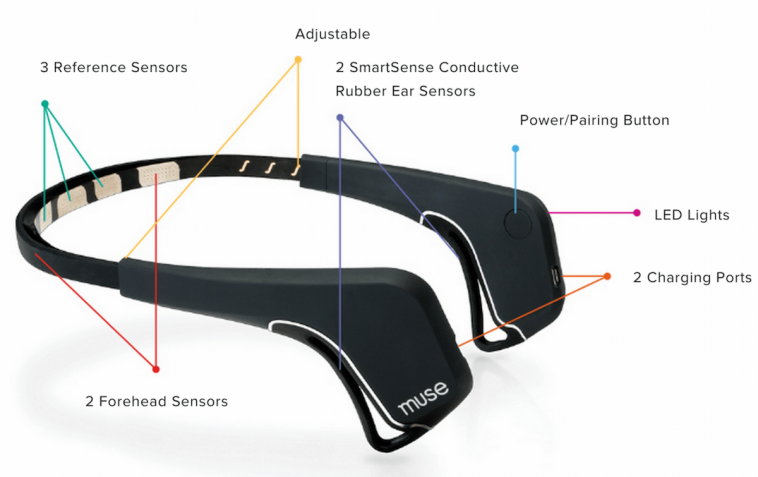 The Muse EEG has been available for the last four years and has a strong set of tools available for data capture, conversion and visualization. In this post we will explore four apps on different platforms that can be utilized to max out the Muse EEG.

Muse Monitor (iOS or Droid)
We have posted about the muse monitor before. Muse Monitor is a third party app. When it was initially introduced it allowed one to take readings from the Muse EEG and get a real time display of brain waves in different parts of the brain. Since the original post more features have been added such as streaming to dropbox, online graphing ability and a fun little easter egg to differentiate between “mellow” and “concentration” states. To access the easter egg simply tap the version number ten times when in the Muse Monitors settings screen to enable this feature. The big wins for using the Muse Monitor is that it only requires a phone (iOS or Droid), requires no setup and is dead simple to use. 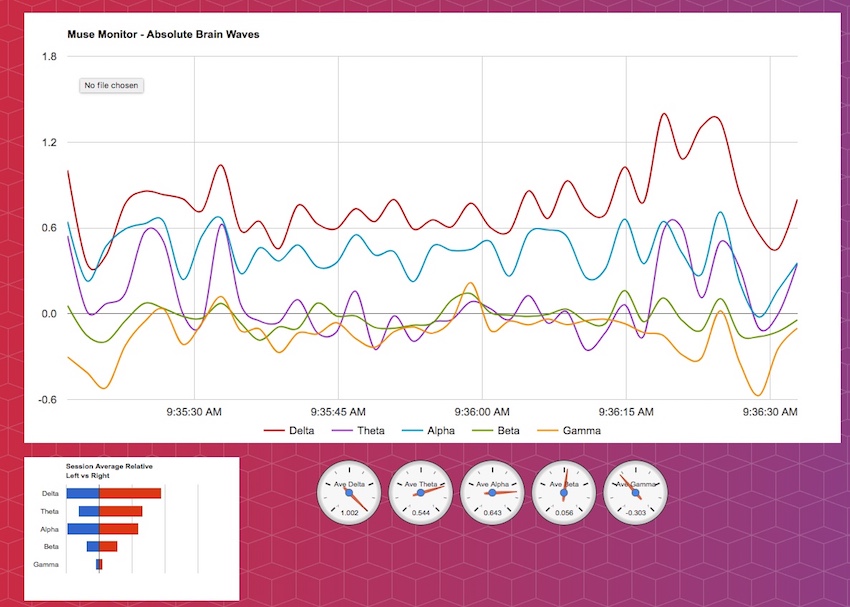 Muse Monitor Graphing Online
There are some great features within the musemonitor on-line graphing utility. Along with the obvious ability creating a chart with brainwave states over time there are some subtle features which can be quite helpful when reviewing EEG data. One is a breakdown summary of left brain versus right brain activity that was recorded. In a calm state I see symmetry, but depending on external stimulation such as light and sound different halves of the brain can become more active. Optional tags can also be inserted within the EEG graph that indicate when the user is clenching their jaw, blinked an eye or one of the electrode connections has lost contact.

MuseIO
MuseIO connects to and streams data from Muse. It is the first program you need to run when using the Research Tools. This command line utility is only available for osx and linux. It is required for the Muse 2014 headband, but not needed for the 2016 version. The 2016 headband can work directly with MuseLab and MusePlayer. Windows 10 users can use MuseDirect.

MuseLab (osx, lin, win)
MuseLab is a visualization and recording tool for Muse and other types of data. It receives data over OSC from MuseIO (it does not connect to Muse itself, you must run both MuseLab and MuseIO).

MusePlayer (osx, lin, win)
MusePlayer is a utility for recording, replaying, rerouting, and converting EEG and accelerometer data from Interaxon Muse EEG devices. It can save to and convert between the native Muse datatype (.muse), Matlab (HDF5), CSV, and OSC replay formats. Command line.
Going Further
Once mastery is achieved in terms of data collection, conversion and visualization once can move onto bigger endeavors. Muse provides an SDK for developing custom applications, supports up to 5 headbands simultaneously (use Adafruit’s Bluetooth USB 4.0 Module) and works with the Raspberry Pi making it possible to bypass expensive laptops and phones.

Comments Off on Muse EEG Utilities for Capture, Conversion and Visualization of Brain Waves