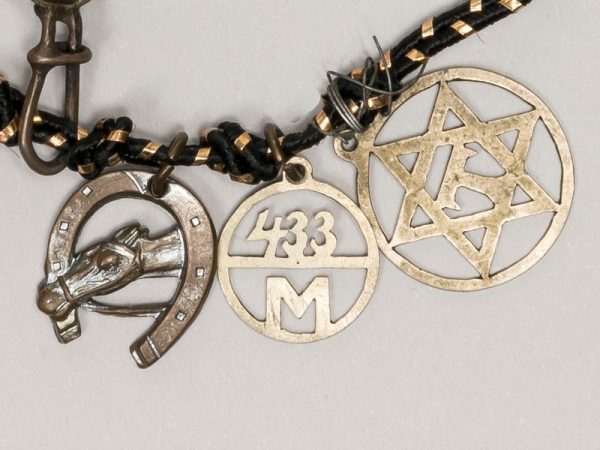 A charm bracelet tells the story of the life lived by its wearer – where one has called home, who one has met, and the circumstances one has experienced. But for Greta Perlman, born a Czech Jew in the Austro-Hungarian Empire in 1904, her jewelry documents her four years surviving the Holocaust. It’s a remarkable artifact, one that Michael Tal, a curator at Yad Vashem, the World Holocaust Remembrance Center in Jerusalem, called “quite unique, and I have not yet come across one like it.”

Perlman assembled her bracelet, currently on view as part of the newly installed permanent collection at the Jewish Museum of New York, at Theresienstadt, the Czech “camp-ghetto” established by the Nazis in late November, 1941. The camp was largely a ghetto labor camp, a holding pen where Jews stayed before being deported to killing centers like Auschwitz. Theresienstadt’s horror was muted enough that the Nazis used it as a propaganda tool, beautifying it for an International Red Cross inspection in 1944, and making a propaganda film there later that year. Some 140,000 Jews—including numerous musicians, writers and artists—were held in Theresienstadt.