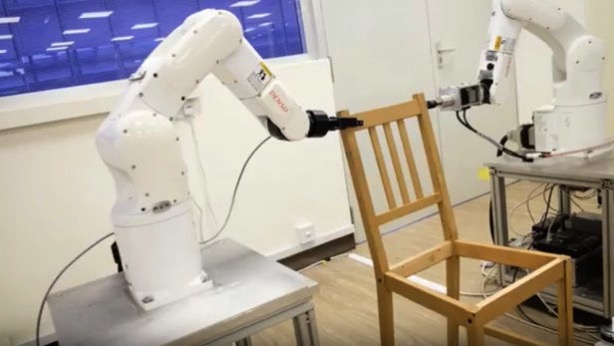 Assembling IKEA furniture is perhaps not the most popular of past times, but homemakers could soon gain a helping hand from a dexterous new robot. Developed at the Nanyang Technological University (NTU) in Singapore, the machine has already demonstrated an ability to put together an IKEA chair by itself, with its creators now setting their sights on other applications that require human-like manipulation of objects.

How long would you give yourself to assemble an IKEA chair? It might depend on how handy you are and what type of chair, but anything around 20 minutes is a pretty respectable time by our reckoning. That’s the time posted by NTU’s new robot, which is built using off-the-shelf components. Confronted with IKEA’s solid wood Stefan chair, the machine spent 11 minutes and 21 seconds planning motion pathways, three seconds locating the parts and then 8 minutes and 55 seconds in assembly mode.

Guided by algorithms coded by its developers, the robot’s main physical components include a 3D camera, parallel grippers on the end of industrial robotic arms capable of six-axis motion, and force sensors mounted on the wrist. Together, these are meant to recreate the human ability to handle and put together intricate objects.

The process starts with the robot taking 3D photos of the different parts, which had been laid out on the floor to mimic the mess us humans create when we open a box from IKEA. After creating a map of the positions of the different parts, the robot then used a two-handed motion to gather the pieces, and force sensors to determine the level of pressure to apply, neatly slotting dowels into holes and putting the chair together piece by piece .

Comments Off on Robot puts IKEA chair together in 20 minutes