We have all seen them and they are multiplying: robots! From Roombas to Mars Rovers to “Lost in Space”, robots are helping us. At Adafruit, the term is #MakeRobotFriend. Robots are an integral part of of society and manufacturing as seen at Amazon and Tesla.

Where do the robots we know now date back to? Let’s skip the deep history of the word robot and science fiction movies for the moment. Let’s look into some real steel and wheel moving robots from their beginnings in the lab.

Early work on small, mobile robots was started by researcher William Grey Walter in the late 1940s. His first robots, named Elmer and Elsie, were constructed between 1948 and 1949 (see them on Youtube here). The robots were often described as tortoises, due to their shape and slow rate of movement, and because they “taught us” about the secrets of organization and life. The three-wheeled tortoise robots were capable of finding their way to a recharging station when they ran low on battery power. Walter’s robots used analog circuits to mimic brain cells in their “thinking”.

The concepts which form the first digital turtle bot (like the tortoises, but more for education) are credited to Seymour Papert, a applied mathematics professor at MIT. Pariert had studied from 1958 to 1963 with noted child psychologist Jean Piaget prior to joining MIT. In 1969, Papert wrote that he believed a robot should be seen as a metaphor, an “object-to-think-with”, very much an interactive experience rather than something to be only watched.

Papert, Wally Feurzeig, and Cynthia Solomon built on the learning aspect of robots to develop the Logo programming language. You can watch Papert discuss the design of Logo and the goals of Logo via Youtube.

But, up to 1969, there was no physical turtle robot. Marvin Minsky, founder of the MIT Artificial Intelligence Laboratory, came to the rescue. Parts were procured from a DoD junkyard by Minsky – he spotted a canister and he thought of turning it into a floor robot. Minsky’s parts were fashioned by Tom Callahan into the first wheeled, pen drawing robot in 1969-70. It was designed to have touch sensors, but ultimately they were too unreliable to use. It had a pen in the middle of its underside and it could be put up or down and so the turtle could leave a trace of its path. Later called the “Yellow Turtle”, it was a tricycle (3 wheeled) and uses a “tail” for stability and undercarriage viewability.

Cynthia Solomon posted an early film of the Yellow Turtle bot to Youtube. She states by 1970-71 school year, the team had a floor turtle and a display (computer) turtle. The Yellow Turtle and another they built were attached to a computer and controlled from four remote terminals. Sharing the turtle was an important educational aspect. The computer environment for kids included:

In 1971, MIT lab consultant Mike Paterson introduced the first Logo controlled turtle robot. It had wires that ran from the bot to control it. The term “Turtle” for these robots is credited to Patterson.

In 1972, there was commercial interest in turtle robots. Paul Wexelblat built the first wireless turtle robot at the pioneering company Bolt, Beranek and Newman (BBN) – BBN would figure prominently in the formation of Arpanet which became the Internet. The BBN turtle robot, named “Irving”, was relatively large and looked a bit like a moving dome on the ground. A small child could even ride around on it. Around the same time, Minsky formed General Turtle, Inc. to market “Logo machines” to schools, but that did not take off and was soon closed.

Radia Perlman joined the MIT AIL from 1974-76. She created a “button box” which enabled children to control her turtle bot via switches rather than a terminal. Perlman’s turtle works were characterized by clear perspex which would be used by several other turtle builders. 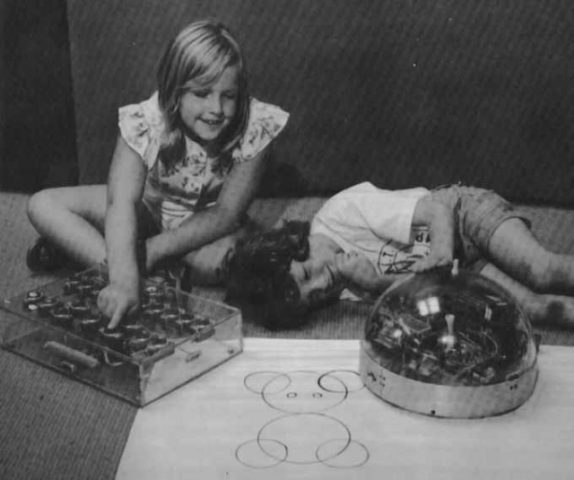 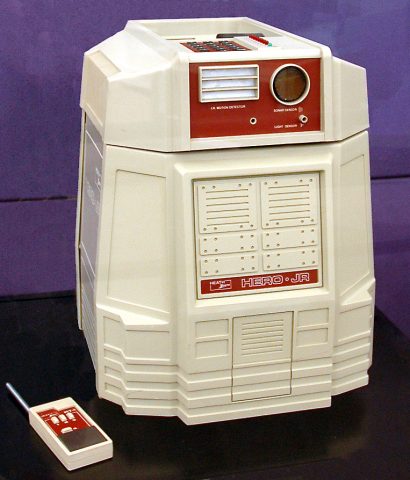 The movie Star Wars came out in 1977 and lo and behold there were squat robots. I would not say that R2-D2 is a turtle robot, but the small black robot MSE-6 on the Death Star was certainly related to the turtle bots in my view.

With digital electronics shrinking the footprint of all computers, turtle bots followed. Starting in 1983 and through 2011, Valiant built the Valiant turtle robot which could be connected to an Apple IIe computer and programmed in Logo. Watch on Youtube here. 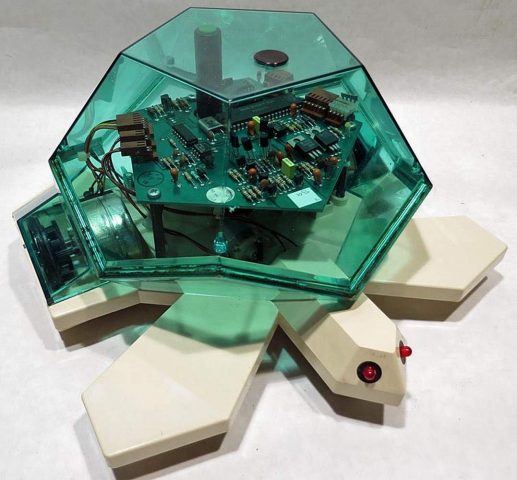 In 1998, Papert collaborated with Lego. This resulted in the Lego Mindstorms series of robotics kits (named after one of Papert’s books). Not just for building turtle bots (although that was an option!), Mindstorms could build any manner of robotic projects. 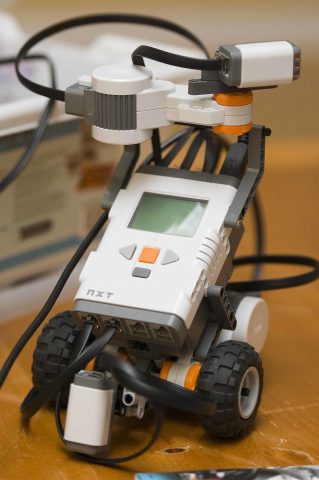 A fair number of commercial robots today, with the most notable being the Roomba, have a very turtle shape. And Roombas have been hacked to be very good programmable turtle robots.

In the last twenty years, hobby electronics and later maker and Open Source companies have offered robot parts and supplies.

Many robotics chassis are in the diminutive turtle shape. Adafruit has a selection of parts just for robotics projects. 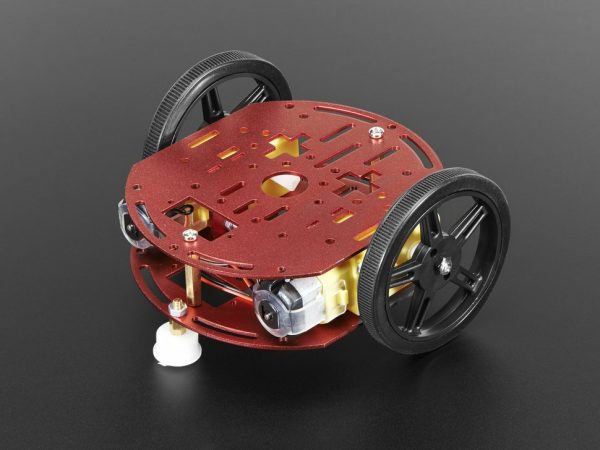 Most often these modern robots differ from the older turtle bots in they do not have a pen to draw on paper. But no one says one cannot be put on by the owner! For drawing, many turn to the Evil Mad Scientist Axidraw bot which is a lot of fun. Not quite a turtle, but it can draw extremely well!

Some modern companies pay homage to education and turtles, robotturtles.com has a game and ebook.

For today, look to see more educational robot hardware  coming out! Adafruit has announced their Crikit robotics board. Perfect for a variety of robotics tasks. And the Crikit’s shape harbors a future where small turtle robots may again roam the halls of homes and classrooms. And there are new fields to explore, from wearables to assisted technologies, which will benefit from inexpensive, easy to use robotics. Keep an eye on Adafruit’s social media channels for more on Crickit!

Part 2 of this post will discuss the history of Logo, software drawing, and where we are today.

Feel free to discuss your turtle bot remembrances in the comments below and in the Adafruit Discord chat.

Comments Off on The History of Turtle Bots – Part 1: Hardware