The Jedi must end — and not in a Luke-finally-figures-out-what-balance-means kind of way, but in an Order 66 kind of way. Sometimes it feels good to be bad.

Check out the cosplay and project below that give glory to the dark side of the force! 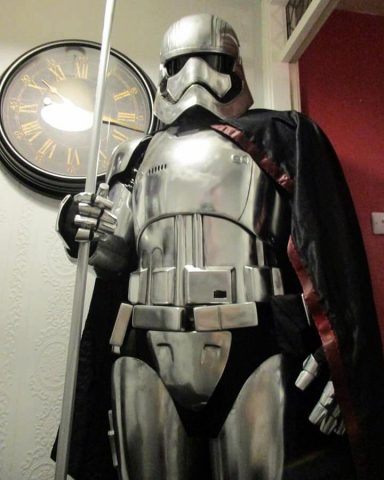 Captain Phasma, introduced in Star Wars: The Force Awakens, has impossibly shiny silver armor. The chrome look isn’t simple to replicate with craft foam and Worbla (though I’m sure it can be done), but fiberglass definitely does the trick. Redditor TheGeeksterChief added Phasma’s sparkling finish with Molotow liquid chrome. They didn’t use the Molotow markers though since that would take forever, but they did use the marker ink. TheGeeksterChief explains:

I ran it through an airbrush slightly thinned with alcohol. The refills are best, as the pens are quite messy to get the ink out of.

How to Make a Boba Fett Jetpack

Have an itch to make a Boba Fett or Mandalorian jetpack from Star Wars for under $50? Then YouTuber Indy Mogul has your back. The latest video in his Backyard FX series will show you how to make the prop from PVC pipe scraps, mouthwash lids, spray paint caps, poster board, and other everyday objects and basic tools.  (Read more)

A Darth Vader Costume That Comes with Force Lightning 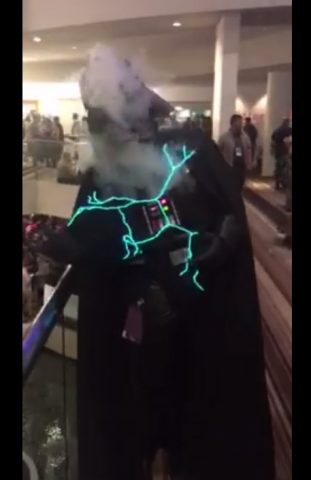 Darth Vader is costume I see executed with varying degrees of screen accuracy on a regular basis. I’ve come across a few different steampunk Vaders, a princess Vader, and other versions of the character. But this is the first time I’ve seen a cosplayer show the moment when Emperor Palpatine unleashed Force lightning upon Vader. The lighting effect can be achieved with LEDs, and you could rig a little fog machine to simulate smoke.

See what the Force lightning and smoke look like in this video by Noel Alexander Costill. (Read more) 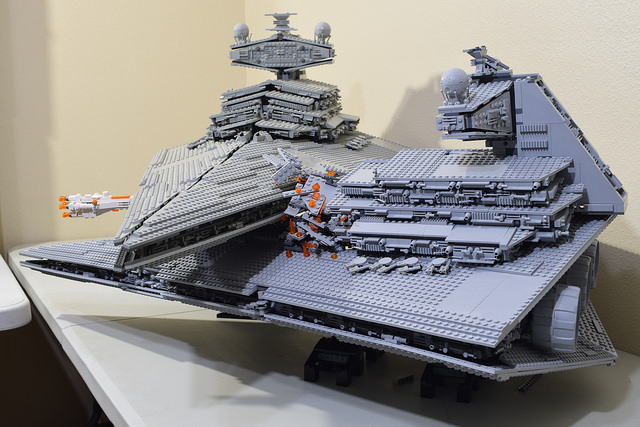 Stuck in the house due to intense storms in Houston. Decided to throw this together using two UCS ISDs. It’s the scene from Rogue One!

Dan Aldred, Raspberry Pi Certified Educator and creator of the website TeCoEd, has built Darth Beats by managing to fit a Pi Zero W and a Pimoroni Speaker pHAT into a LEGO Darth Vader alarm clock! The Pi force is strong with this one.

The formula, in the form of “LEGO + Star Wars”, applies to Dan’s LEGO Darth Vader alarm clock. His Darth Vader, however, was sitting around on a shelf, just waiting to be hacked into something even cooler. Then one day, inspiration struck: Dan decided to aim for exponential awesomeness by integrating Raspberry Pi and Pimoroni technology to turn Vader into an MP3 player. (Read more)

Star Wars Used to Explain the Concept of Angular Size 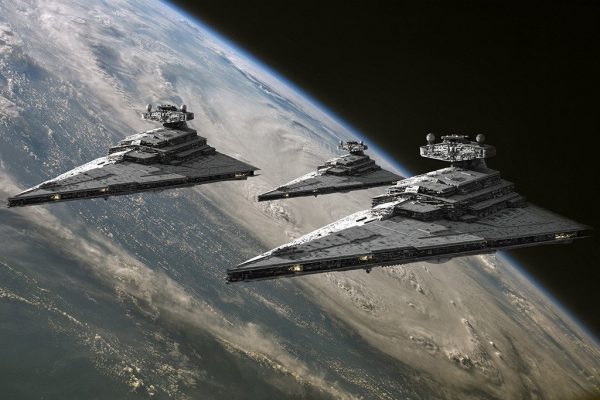 The resistance is trying to make a quick getaway before the First Order arrives. Then—boom! It’s too late. They’re already here—two Star Destroyers just arrived near the planet in space.

This is the scene that opens Star Wars: The Last Jedi, which just came out on DVD. Having the whole movie means I get to do lots more fun physics analysis, including answering this question: Could you actually see those destroyers from the surface of the planet?

The first question to consider: How far can a human see? Well, that’s a simple question with an easy answer. I can see the moon—that’s more than 200,000 miles away. Better yet, I can see a galaxy (if it’s really dark) and that is over 2 million light years away. So, humans can see really far. Distance isn’t the problem.

Really, the key idea here isn’t “how far” but rather “angular size.” The angular size of an object depends both on the actual size and the distance from the observer: The reason you can see something like the moon even though it is super far away is because it is big. If you put the moon much farther away, you couldn’t see it. You can calculate the angular size as just the object size divided by the distance (in radians). If you want to convert to degrees, you need to also multiply by 180 and divide by π.