In-mouth sensor could tell users when to halt the salt! 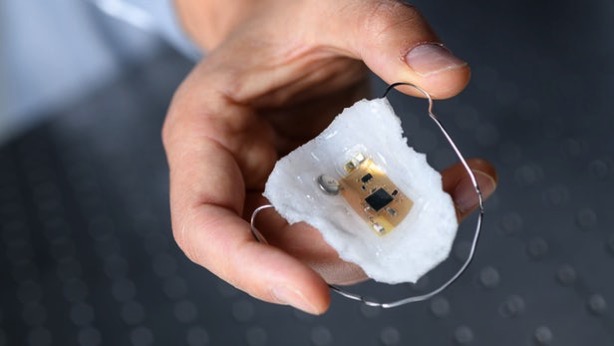 According to a study conducted by the American Heart Association, about one third of Americans can’t estimate their daily sodium intake, while 54 percent estimate they’re consuming less than they actually are. If someone has a condition such as hypertension, obesity or diabetes, then knowing the correct figure is important – which is why scientists have developed an oral sodium sensor.

Created by a Georgia Institute of Technology team led by assistant professor Woon-Hong Yeo, the biocompatible prototype device is similar in form to a retainer.

It consists of an ultra-thin, breathable elastomeric membrane, with embedded flexible electronic components. Those components include a sensor that detects the amount of sodium in what the wearer eats or drinks – in real time – along with a Bluetooth module that transmits that information to an app on a paired smartphone or tablet located up to 10 meters away (33 ft).

The idea is that the app would not only let users (and their doctors) accurately keep track of their sodium intake, but it would also advise them on planning meals, based on how much of their daily salt allocation they had already consumed.

So far, the device has been successfully trialled on three adult test subjects, who wore it for up to a week while consuming solids and liquids such as vegetable juice, chicken soup and potato chips. They reportedly found it comfortable to wear.

That said, the scientists hope to miniaturize the technology, stating that it could conceivably be as small as an individual tooth. They would also like to get rid of its battery, which has to be recharged on daily basis, possibly replacing it with an induction coil that would allow the device to be wirelessly powered via an external transmitter.

Comments Off on In-mouth sensor could tell users when to halt the salt!