Today marks the 100th birthday of legendary physicist Richard Feynman. Feynman is known academically as the Nobel prize winner for his work on quantum electrodynamics. He also was on the Shuttle Challenger commission and famously dipped an o-ring in a glass of ice water on stage and showed how brittle it became. But Feynman was very down to earth, he spent many years at the California Institute of Technology (Caltech) teaching introductory physics and spent a great amount of time educating and generally having fun.

Feynman is best known as a person with a unique view of science and the universe. In his explanations, he often speaks in “Feynmanisms”, interesting takes on subjects. A few of Feynman’s quotes, although there are thousands:

My father told me the name of a bird, and told me the bird’s name in russian, chinese, and japanese, and when you know all the names of the bird, you still know nothing about the bird.

I think it’s much more interesting to live not knowing, than to have answers which might be wrong.

Feynman is also known for many antics, some of which have been collected in books about his life. He was a good lock picker, having taught himself tricks to open up safes at Los Alamos where he worked on the Manhattan Project. 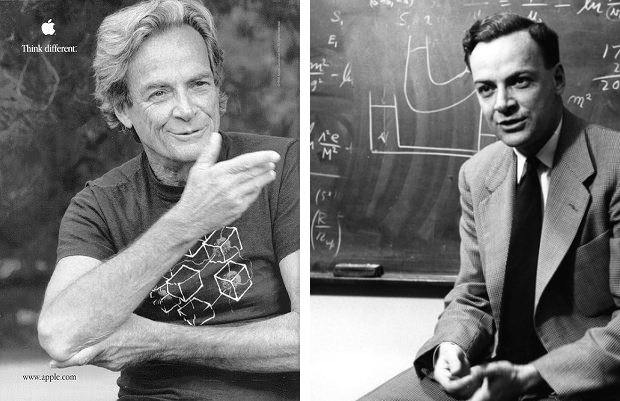 In later life, Feynman wasn’t above posing for an Apple ad. But towards the end it was his attempt to travel to the little known place called Tuva, then in the Soviet Union, to see the Tuvan throat singers, just because he found out about the place, it was interesting, and it was a challenge to try to get there. Much like his life and work. Happy Birthday professor.

Feynman lectures on physics for free at Caltech.edu.