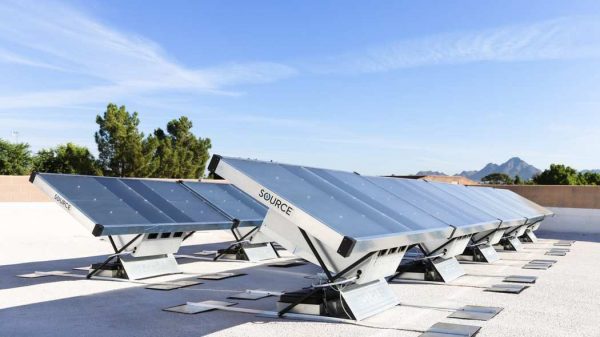 Making water out of thin air.

On Monday, the Australian Renewable Energy Agency (ARENA) announced that it would be spending nearly half-a-million dollars on 150 solar-powered devices that can literally produce water out of thin air. The agency hopes that these devices can provide relief to drought stricken areas in the country, as well as lower dependence on plastic water bottles.

The devices, called Source, are manufactured by an Arizona-based company called Zero Mass Water. Each ‘hydropanel’ weighs about 300 pounds and consists of an array of four foot by eight foot solar panels, an air filter, and a water reservoir that can hold up to 30 liters of water. Fans draw outside air through the hydropanel’s air filter is made out of a proprietary hygroscopic material that attracts water molecules from the air. This water is then routed into the reservoir where it is treated with minerals and ozone to maintain taste and quality.

Comments Off on Australia’s Hydropanel Plan