Chien-Shiung Wu’s contributions to her field deserve to celebrated many times over. Known to some as “the First Lady of Physics,” Wu, a Chinese-American, had an impressive and extensive career.

Read more about her on Wikipedia: 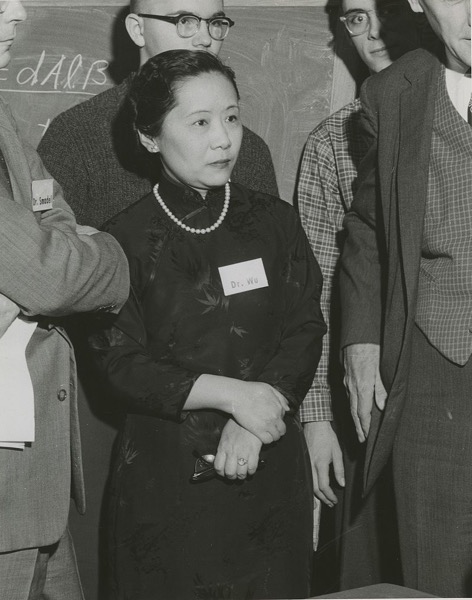 Wu and Yuan were married at the home of Robert Millikan, Yuan’s academic supervisor and the President of Caltech, on May 30, 1942. Neither the bride’s nor the groom’s families were able to attend due to the outbreak of the Pacific War. Wu and Yuan moved to the East Coast of the United States, where Wu became a faculty member at Smith College, a private women’s college in Northampton, Massachusetts, while Yuan worked on radar for RCA. She found the job frustrating, as her duties involved teaching only, and there was no opportunity for research. She appealed to Lawrence, who wrote letters of recommendation to a number of universities. Smith responded by making Wu an associate professor, and increasing her salary. She accepted a job from Princeton University in New Jersey as an instructor for Naval officers.

In March 1944, Wu joined the Manhattan Project’s Substitute Alloy Materials (SAM) Laboratories at Columbia University. She lived in dormitory there, returning to Princeton on the weekends.[27] The role of the SAM Laboratories, headed by Harold Urey, was to support the Manhattan Project’s gaseous diffusion (K-25) program for uranium enrichment. Wu worked alongside James Rainwater in a group led by William W. Havens, Jr.,[28] whose task was to develop radiation detector instrumentation.

In September 1944, Wu was contacted by the Manhattan District Engineer, Colonel Kenneth Nichols. The newly commissioned B Reactor at the Hanford Site had run into an unexpected problem, starting up and shutting down at regular intervals. John Archibald Wheeler suspected that a fission product, xenon-135, with a half-life of 9.4 hours, was the culprit, and might be a neutron poison. Segrè then remembered the work that Wu had done at Berkeley on the radioactive isotopes of xenon. The paper on the subject was still unpublished, but Wu and Nichols went to her dorm room, and collected the typewritten draft prepared for the Physical Review. Xenon-135 was indeed the culprit; it turned out to have an unexpectedly large neutron absorption cross-section.

Comments Off on Chien-Shiung Wu #AsianPacificAmericanHeritageMonth