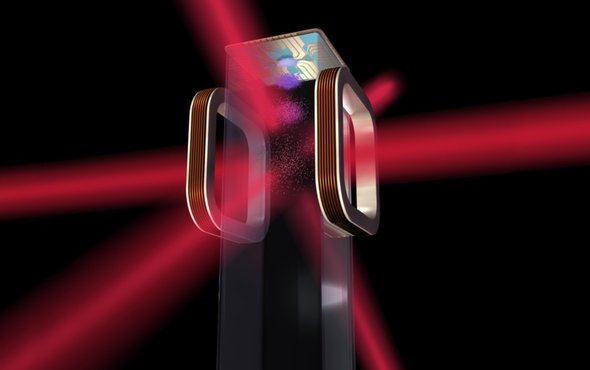 Quantum physicists are about to get their own playground in space. NASA’s Cold Atom Laboratory, scheduled to launch to the International Space Station on 20 May, is set to be the coldest place in the known Universe. Researchers will use the lab to probe quantum phenomena that would be impossible to observe on Earth.

The US$83-million mission will be used to study quantum mechanics on the macroscopic scale by making a state of matter known as a Bose–Einstein condensate (BEC). These are clouds of hundreds of thousands of atoms that, when chilled to just above absolute zero, behave as waves that synchronize into a single quantum object. “Just being able to do these experiments in space I think is a huge accomplishment,” says Kamal Oudrhiri, mission manager at the Jet Propulsion Laboratory (JPL) in Pasadena, California.

On Earth, gravitational forces usually disperse these condensates within a few seconds. The closest that BECs have come to being in space-like conditions is during brief stints in a research rocket, or falling from a drop tower over 9 seconds. But, floating on the space station, they should be able to exist for at least 10 seconds. That’s long enough for them to be cooled to record-low temperatures—perhaps as little as 20 trillionths of a degree above absolute zero. That would be the coldest known temperature in the Universe, says Oudrhiri. Colder and long-lasting condensates will “push the frontiers of studying fundamental physics”, says Gretchen Campbell, an atomic physicist at the US National Institute of Standards and Technology in Gaithersburg, Maryland. “It’s something people have hoped for for almost 15 years.”

Real estate on the space station is at a premium, so engineers had to crunch down atomic-physics equipment that usually fills a large room into a cool-box-sized chest. The equipment will cool rubidium and potassium atoms by scattering laser light off the particles in all directions to slow them to almost a standstill. It will then use magnetic fields to trap the cloud. To create the condensate, other cooling techniques are used to push the cloud even closer to absolute zero—including creaming off the most energetic atoms using a radio-wave ‘knife’ and widening the trap to let the cloud expand.

Engineers also had to design shielding to protect the delicate condensates from interference from densely packed components and from Earth’s varying magnetic field. Although astronauts will unpack and install the equipment, the experiments will run only while the team is asleep to minimize disruption from any movements.

The technology is simpler than initially intended, after a more-complex version of the lab developed a leak that affected the vacuum chamber and threatened to delay the project. So physicists will not yet be able to achieve their ultimate goal of performing space-based atom interferometry—a process that involves splitting the condensate’s quantum wave in two and recombining the waves. The resulting interference patterns would allow scientists to analyse the effects of gravity with exquisite precision, as well as test whether condensates could be used as very sensitive rotation and gravity sensors. But the more-advanced kit should arrive by the end of 2019, says Robert Thompson, project scientist for the mission at JPL.