The interesting relationship between the U.S. and food as seen in a series of posters from the United States Food Administration. 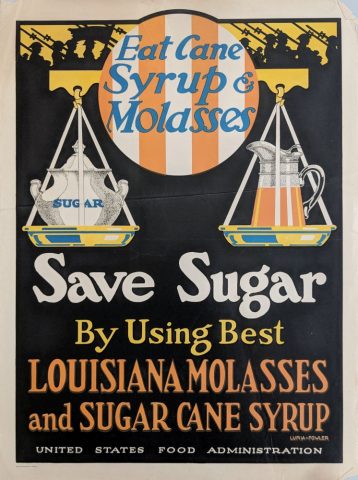 Via the New York Historical Society

Avoid wheat, eat less meat and fried foods, use more legumes, stop with the sugary drinks, limit the cake and pastry, buy local—advice we now hear a good deal, but, 100 years ago, it was downright patriotic. As World War I devastated Europe and the United States entered the war in 1917, American mobilization on the home front operated on a major theme, “Food Will Win the War.” Herbert Hoover, then a humanitarian and engineer, was called upon by President Woodrow Wilson to head the project. With trade routes disrupted and the fields of Europe abandoned by farmers and bloodied by soldiers, the Allies were relying on the United States for foodstuffs. Now Hoover was faced with seeing that the massive American force “Over There” was also fed. All of this followed upon two years of a poor food crop in the American Midwest. Hoover refused a salary, setting the example of volunteerism that would make his United States Food Administration an overall success.

Comments Off on Historical Posters of the U.S. Food Administration #ArtTuesday