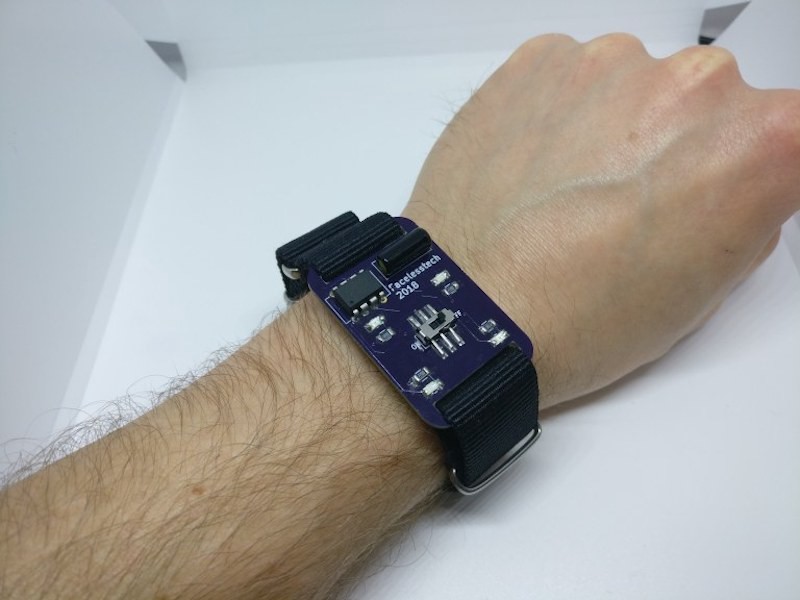 When you’re getting started with electronics, plugging in an Arduino to program and making an LED flash requires little in the way of parts or physical wrangling. However, when you decide to shrink your designs down to a wearable, things get a bit more complicated. In order to facilitate future designs, hacker Facelesstech made a wrist-mounted PCB that turns four lights on and off when shaken, detecting motion with a ball tilt sensor. It’s a fun device, and he even used few clever tricks that may come in handy in the future.

In order to attach a wrist band, he had the PCBs cut in a rectangular pattern with slots cut out for it to fit through. A NATO band works perfectly for this application, and as an added bonus, the fact that it loops around the entire wrist means that it insulates its coin cell battery on the bottom from contacting his skin. The other neat aspect of this design is that instead of integrating pins into the wearable face for programming, he actually created his own pogo pin fixture for it. This makes contact with the needed ATtiny85 without anything extra on the PCB itself.

As it stands right now, the “watch” is certainly an interesting distraction. If you’d like to examine or build on his design, code and board files are available on GitHub.

Comments Off on ATtiny85 Wearable Platform Blinks When Shaken #WearableWednesday