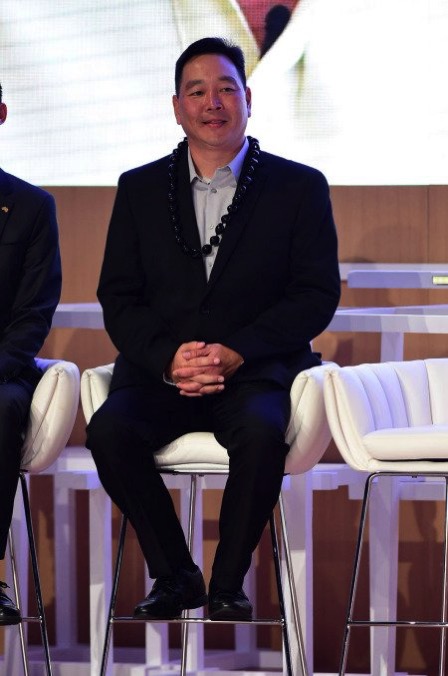 The Waialua High School robotics team was just named regional champ, beat 54 teams at the international Festival de Robotique in Montreal last month and they will be traveling to Houston in April for the world championship. In fact, this team has qualified for the world championship every year since 2001, and they’ve won robotics competitions all over the U.S. and in Australia, China and Japan.

Credit for the team’s glory goes to Glenn Lee, an affable electrical engineer who originally took a teaching job as a way to support himself through business school. He led a competitive electric car building and racing team, and was excited when a robotics team from California visited the school in Waialua, Hawaii, almost 20 years ago. Instead of moving on in his career, as he had originally planned, he stayed to help found the school’s first robotics team — a first for the entire state.

Lee says he’s proud his teams are known as fierce competitors, but his mission is larger than building the best machines. “The goal is not necessarily to get them interested in robotics — it’s just a carrot to get them interested in STEM (science, technology, engineering and math),” he says. When the program started, hardly any graduates continued to study STEM subjects in college. Last year, dozens of robotics students did.

For inspiring so many students, Lee competed with 30,000 teachers from across the globe for the $1 million 2018 Global Teacher Prize by the Varkey Foundation, and was the sole teacher from the United States to make it to the final round. Lee felt exalted as he sat on stage at the award ceremony in Dubai two weeks ago with celebrities, including Charlize Theron, Trevor Noah and Al Gore in attendance. After hobnobbing with nine other finalists and a slate of movie stars and politicians, Lee didn’t take home the pot of gold, but he had a profound realization. As a teacher who is not paid for his time teaching robotics, and must raise more than $200,000 each year to support the program, he’s concerned about public funding priorities. “The teacher is the most important person in any education system,” he says. “We need to stop trying to repair education. There are a lot of proven practices. The problem is we need to support it.”

In the tiny town of Waialua, on the North Shore of Oahu, he’s a tireless energizer. The historic sugar plantation that employed Lee’s Korean grandfather and so many others, closed down two decades ago. The school’s enrollment has dwindled ever since, as families have moved away. The population is less than 4,000. Half of the students don’t have a computer or Internet at home, and many have never been outside their hometown. “A lot of kids don’t ever leave our community, so they don’t aspire to anything bigger,” Lee says.

Lee starts with middle schoolers, helping 7th graders build confidence and enthusiasm with easier projects. The high school varsity team now has 30 students. For them, a robotics challenge is issued each January, and the students are given six weeks to work on it. Then they seal their work and bring it to the meets, where they collaborate with other teams and answer questions from judges. This year the students are competing with their hand-built 150-pound remote control robots that must place large cubes on top of small scales, some high off the ground, avoiding knocking off any cubes in the process. Lee credits the 350 long hours spent building robots after school and on weekends for their continued success. “We convinced our kids it’s cool and it’s fun,” he says.