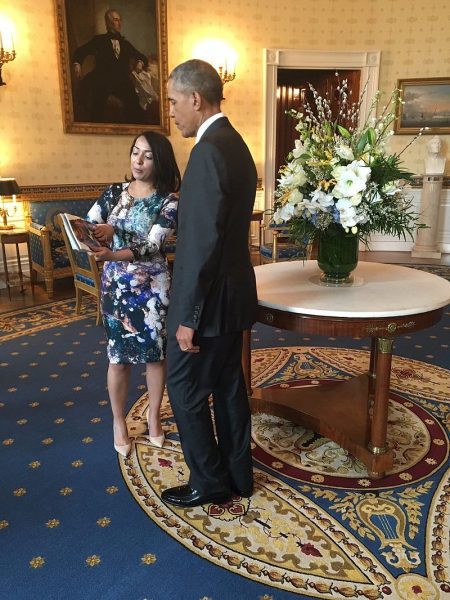 Read more about her on Makers:

Growing up in overwhelmingly white suburban New Jersey, Amanat was pained and felt like an “outsider” as one of the only Muslim families in the community, and often the only person of color in her class. Amanat’s identity as a Pakistani-American Muslim (her parents were recent immigrants) in an otherwise overwhelmingly Caucasian community led her to find solace in an unlikely place: on the pages of X-Men comic books, where she found friends and inspiration in the “otherness” of the superhero characters of those stories.

Just as Amanat felt “different” and “misunderstood,” the exiled characters of these comics looked to their differences for strength. This was a revelation to her, and has become Amanat’s guiding principal.

As a child and budding teen, Amanat was touched and inspired to find a “strong black beautiful woman, a man in a wheelchair” on the pages of comic books — characters who were being celebrated as people who mattered, and people who were strong. Above all else: people who could help defend others and be a guiding light.

Much of the work she’s been charged with creating at Marvel is about reaching out to girls and women — bringing them into the world of graphic storytelling, and helping them to feel at home there. Amanat values inclusion above all else, and her current work now as Marvel Comics Director of Content & Character Development allows her to continue to work for inclusive storytelling for all readers, regardless of their race, age, gender, or beauty.

Amanat’s crowning achievement has been the creation of “Ms. Marvel” in 2014, a series featuring the first-ever Muslim-American comicbook superhero, “Kamala Khan,” a normal teenage girl who happens to be Muslim. The groundbreaking series immediately skyrocketed to success — going into an unprecedented seven printings in its first year alone.

Comments Off on Sana Amanat #AsianPacificAmericanHeritageMonth