Today for Asian Pacific American Heritage Month we are taking a look at Dr. Takamine Jōkichi. Among his many notable accomplishments Takamine was the first person to isolate and purify adrenaline. 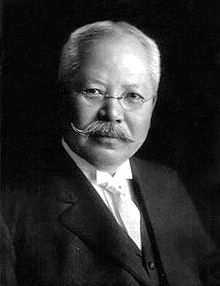 Takamine went as co-commissioner of the Cotton Exposition to New Orleans in 1884, where he met Lafcadio Hearn and Caroline Hitch, his future wife. He later emigrated to the United States and established his own research laboratory in New York City but licensed the exclusive production rights for Takadiastase to one of the largest US pharmaceutical companies, Parke-Davis.[5] This turned out to be a shrewd move – he became a millionaire in a relatively short time and by the early 20th century was estimated to be worth $30 million.[4]

In 1901 he isolated and purified the hormone adrenaline (the first effective bronchodilator for asthma) from animal glands, becoming the first to accomplish this for a glandular hormone.[1][6] In 1894, Takamine applied for, and was granted, a patent titled “Process of Making Diastatic Enzyme” (U.S. Patent 525,823)—the first patent on a microbial enzyme in the United States.[3][7]

Many of the beautiful cherry blossom trees in the West Potomac Park surrounding the Tidal Basin in Washington, DC were donated by the mayor of Tokyo (Yukio Ozaki) and Jokichi Takamine in 1912.[9]