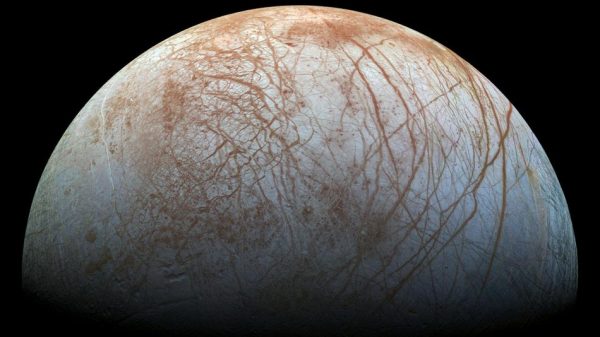 Europa is objectively one of the most badass moons in the solar system.

The relatively small moon of Jupiter is thought to have a liquid water ocean beneath its icy shell, and it’s considered one of the most likely places to host alien life in our solar system.

Now, thanks to a new study published in the journal Nature Astronomy this week, we may be inching closer to figuring out if Europa could host life in the ocean hidden beneath its frozen surface.

According to the new study, NASA’s Galileo spacecraft — which ended its mission by purposefully crashing into Jupiter’s atmosphere in 2003 — likely flew through a plume of water erupting from Europa in 1997.

We just didn’t know about it until now.

It’s not unheard of that an icy moon in distant space would have water shooting out from it. The Cassini mission caught sight of plumes erupting from Saturn’s moon Enceladus.

The only surefire way to find out if Europa does have plumes erupting from it is to send another mission there to observe and even sample the water.

“To detect a plume for certain, we’ll have to return to the Jupiter system, and NASA’s Europa Clipper spacecraft, currently in development, will do just that,” Phillips said.

“If plumes do exist on Europa, Europa Clipper will be able to fly through them and study the chemical properties of the material erupted from the surface.”

Sampling the water possibly eruption from Europa could have huge implications for our understanding of the world.