Faisal Alam is a gay Pakistani American who founded the Al-Fatiha Foundation, an organization dedicated to advancing the cause of gay, lesbian, bisexual, and transgender Muslims. 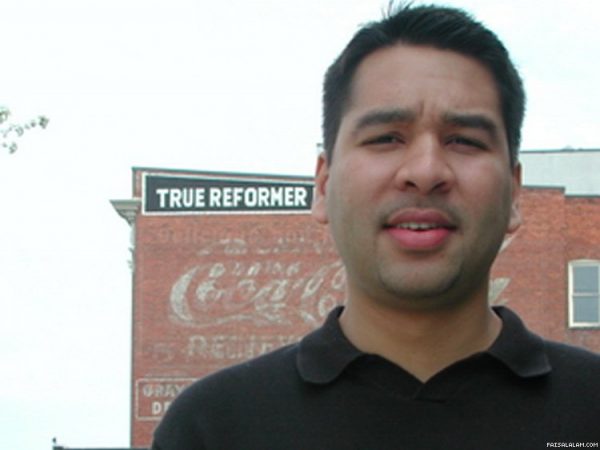 Read more about her at the Religious ArchivesNetwork:

Faisal began the first internet-based email discussion group in November of 1997 which eventually led to the first gathering for LGBTQ Muslims in October of 1998 in Boston. Al-Fatiha was founded at this gathering. Since that time Faisal has traveled around the country and around the world to help start local support groups for LGBTQ Muslims and chapters of Al-Fatiha. Since its formation less than four years ago, Al-Fatiha has grown to include 9 chapters in three countries (in the United States, Canada, and the United Kingdom). Al-Fatiha has also organized four major conferences and retreats bringing together hundreds of LGBTQ Muslims & their allies from around the world.

In addition to his LGBT faith-based activism, Faisal is also involved in numerous local organizations. He is a member of AQUA (Asian Queers United in Action) and Khush (LGBT South Asians), both in Washington, DC. He is also an active member in OUTFront, the LGBT program of Amnesty International, USA.

Faisal has spoken at many LGBT interfaith panel discussions and has presented at numerous interfaith services, around the country. He has also spoken at many major events including Youth Pride Day in Washington, DC (2000), the Millennium March on Washington (2000), and the Creating Change (National LGBT Activist Conference – 2001).

Faisal’s work with Al-Fatiha has been featured by LGBT and mainstream newspapers and magazine around the United States and in many other countries abroad including the New York Times and the Washington Post. He was also voted an “Innovator” by the Advocate Magazine in 2001.

Faisal is a former staff member of the National Gay and Lesbian Task Force where he helped organize the Youth Leadership Institute, which brings together 40 LGBT youth-activists from around the country for a week long issue-based and skills-based training. He has also done work in HIV/AIDS prevention and education in the Asian & Pacific Islander communities. He is currently employed at the National Minority AIDS Council, in Washington, DC.

Comments Off on Faisal Alam #AsianPacificAmericanHeritageMonth