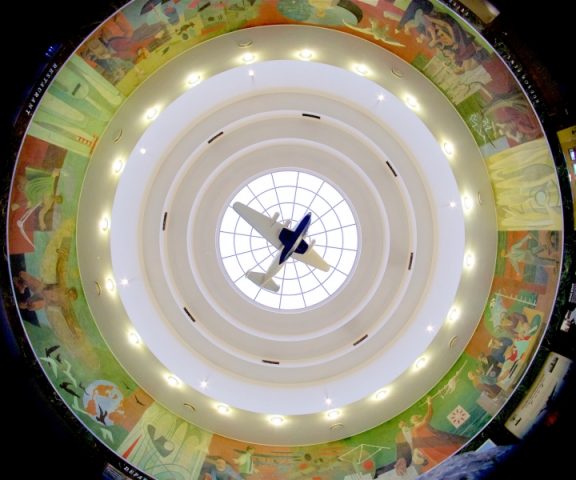 Through June 30, passengers traveling from LaGuardia Airport’s Marine Air Terminal (Terminal A) can visit the Landing Pages kiosk for a story. Each of these compact tales is written by Lexie Smith and Gideon Jacobs over the length of a traveler’s flight, and delivered to their phone upon landing.

“To drop a story in someone’s inbox that could potentially remove the reader from the anxiety of travel for a moment is part of the motivation behind writing them,” Smith told Hyperallergic. “The airport is also just a ripe ecosystem for observing the human experience. It’s the crossroads for people who might otherwise never be in the same space.”

Landing Pages is the first project from the ArtPort Residency, a new program of the Queens Council on the Arts in partnership with the Port Authority of New York and New Jersey (PANYNJ). The initiative, as covered by Claire Voon for Hyperallergic, invites Queens-based artists to create three-month-long public art projects in the rotunda of the Marine Air Terminal. The Art Deco terminal, with its massive WPA-era mural by James Brooks, is New York City’s most beautiful place for an airline departure, and its artistic history as well as the daily foot traffic inspired the ArtPort projects. Following Smith and Jacobs, Sandra Lopez-Monsalve will launch a sonic exploration in July that incorporates traveler interviews. Then in October, Sherwin Banfield will begin his studies of the historic airport and its stream of visitors for sculpted murals. Finally in January, Brian Soliwoda will take over with the building of a Clipper sailing ship from plant materials and papier-mâché, a reference to the original use of the terminal for seaplanes.