It's a great fun to see the Project Walking on Water by Baohua Li. Love it, and would definitely try it on @MakerFaireSZ#ProjectSpotlight pic.twitter.com/n1F01nsVbw

I just stumbled upon this project by Baohua Li at 2017’s Maker Faire Shenzhen and had to know more. Now the tweet above is golden, but check out the video below courtesy of TAKASU Masakazu – especially at the 1:00 mark where Li performs multiple ‘stomp-n-sink’ maneuvers to prove the concept of his water-walker project – amazing! (And a total cardio workout I’m sure!) 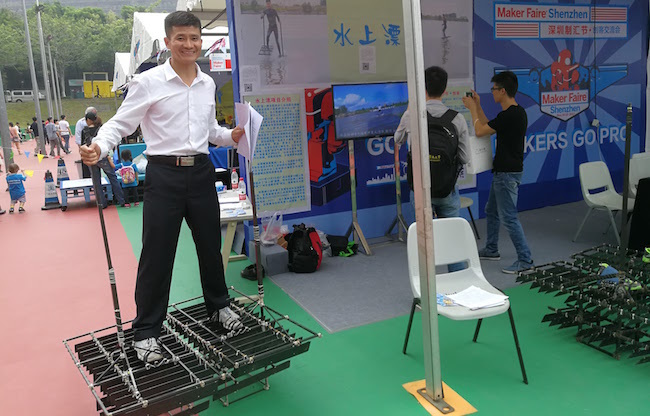 The text below is translated from Japanese using Google Translate, via diamond.jp:

I am participating in the Asian Maker Fair the most in the world. Compared to other countries’ maker fairs with that eyes, Chinese maker fair has strong nature that young people who entrepreneurs who start a product that smells like (mostly dishonest) will exhibit, “I want to make it because I want to make it I felt that I would not see much what creativity and originality overflowed. It seems that the industrial trade fair and the Maker fair introduced in the previous series, “Shenzhen’s Electrical Show, Cutting-edge fun from the cutting edge to pakuri” report do not change very much. However, this time the Maker Fair Shenzhen 2017 felt a sign that it will change.

What I was attracting great attention is a tool for the new sports of walking on water called “water floating” in the above picture. It was an inventor named Baohua and entrepreneurs were exhibiting it.

The board arranged like a comb becomes like a plate when it sinks into water, the resistance becomes large, and when raising it from water it falls and the resistance becomes small. Even though there is some resistance, even if there is some resistance, it will eventually settle in a couple of seconds, but this mechanism will eventually sink, but by this mechanism it will take a few seconds to sink and moment to raise There. So you can walk on the water if you continue the act of pulling up your left foot before putting your right foot down and putting your right foot forward before your left foot sinks.