Breaking Down the 76477 “UFO” Sound Effect Chip from Space Invaders

Another fantastic reverse engineer from Ken Shirriff – this time of the 76477 sound effect chip from Space Invaders responsible for the “UFO” sound: 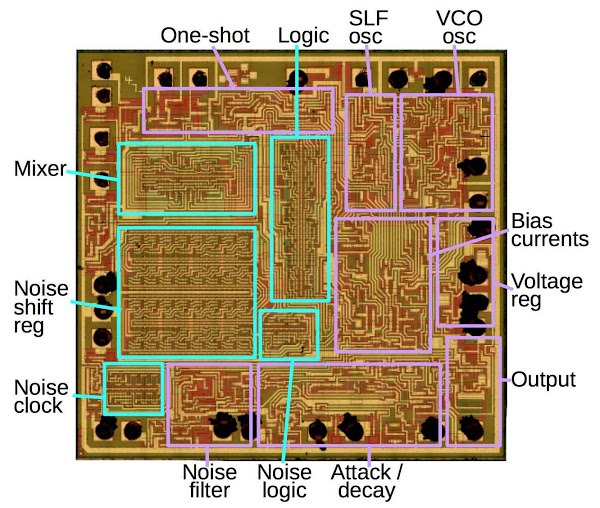 The 76477 Complex Sound Generation chip (1978) provided sound effects for Space Invaders1 and many other video games. It was also a popular hobbyist chip, easy to experiment with and available at Radio Shack. I reverse-engineered the chip from die photos and found some interesting digital circuitry inside. Perhaps the most interesting is a shift register based white noise generator, useful for drums, gunshots, explosions and other similar sound effects. The chip also uses a digital mixer to combine the chip’s different sound generators. An unusual feature of the chip is that it uses Integrated Injection Logic (I2L), a type of digital logic developed in the 1970s with the goal of high-density, high-speed chips. (I wrote about the chip’s analog circuitry last year in this article.)

Looking under a microscope, you can see the circuitry that makes up the chip. The yellowish lines above are the metal traces that connect the circuits of the die. The reddish and greenish regions are the silicon of the chip, forming transistors and resistors. The black blobs around the edges show where tiny bond wires connected the die to the integrated circuit pins. I’ve outlined the analog circuits outlined in purple, while digital circuits are in cyan. The 76477 is primarily analog—most control signals are analog, the chip doesn’t have digital control registers, and most sounds are generated from analog circuits—but about a third of the chip’s area is digital logic.

The block diagram below shows the 76477 chip’s functional elements and can be compared to the die photo above. The voltage-controlled oscillator (VCO) produced a tone whose frequency depends on the control voltage. The “super low frequency” SLF oscillator generated a triangle wave. Feeding this into the VCO generated a varying pitch, useful for bird chirps, sirens, or the warbling sound of the UFO in Space Invaders. The “one-shot” produced a pulse of a fixed length to control the length of the sound. The envelope generator made the sound more realistic by ramping its volume up at the start (attack) and down at the end (decay). The digital white noise generator was used for drums, gunshots, explosions and other similar sound effects. Finally the digital mixer combined these signals and fed them to the output amplifier. 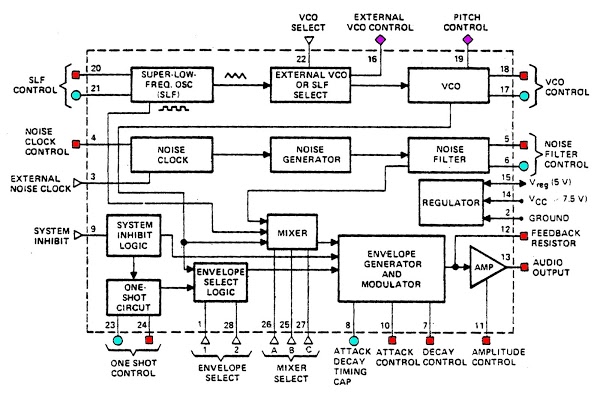