Functional MRI in the Nile crocodile: a new avenue for evolutionary neurobiology 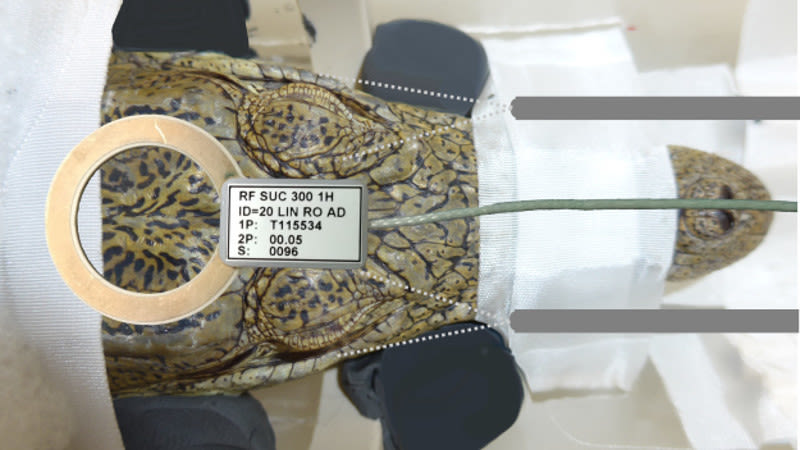 In a scientific first, researchers have used an MRI scanner to study the brains of Nile crocodiles. Sounds weird—and even a bit dangerous—but the experiment is revealing new insights into the evolution of brains and how mammals and birds acquired the capacity to comprehend complex sounds.

Our brains are the product of millions of years of evolution. Scientists would very much like to know how some of the most ancient brains functioned and evolved over time, but that’s obviously not possible, owing to the complete lack of primordial brains to work with. As a good consolation prize, however, scientists can work with crocodiles—an animal that originated more than 200 million years ago, barely changing over the eons. Accordingly, scientists can study crocodiles to understand at which point certain brain structures and behaviors first emerged.

The point of the new study was to determine how the crocodilian brain might respond to complex sounds, and to see how the resulting brain patterns might compare to those observed in mammals and birds. The scientists were hoping to identify precursor brain structures and functions that allow for the processing of complex sights and sounds.

To observe how complex visual and auditory stimulation triggers activity in the reptilian brain, a team led by Felix Ströckens from the Department of Biopsychology at Ruhr University Bochum set about the task of scanning Nile crocodile (Crocodylus niloticus) brains using a functional MRI (fMRI) scanner. These devices are typically used in diagnostic and research settings, and even for studying mammals such as dogs, but this is the first time a cold-blooded animal has been analyzed in such a machine. The results of the new study now appear in the science journal Proceedings of the Royal Society B.

Needless to say, the experiment was not simple and not without its perils, requiring the scientists to adjust accordingly.

“The difficulty in scanning crocodiles—beside being a little bit dangerous for the experimenter—is that they are cold-blooded reptiles,” Ströckens told Gizmodo.

“We thus had to find a temperature which allowed us to pick up a good signal and was comfortable for the animal,” he said. “We also had to keep this temperature stable within the scanner which is relatively difficult since the coils used for scanning also emit heat.”

To make sure the crocodiles didn’t move in the MRI machine, and to prevent them from snapping at the scientists, the researchers sedated the animals and taped their snouts shut just to be extra safe.

“Fortunately they seemed to like the scanner tube and did not move at all, which would have ruined our study,” said Ströckens. “We had to be very careful, since an angry crocodile could have easily damaged the scanner or injured us—even when they are only one year old, they have pretty strong jaw and tail muscles. But everything went fine and neither we nor the animals got injured.”

Comments Off on Functional MRI in the Nile crocodile: a new avenue for evolutionary neurobiology