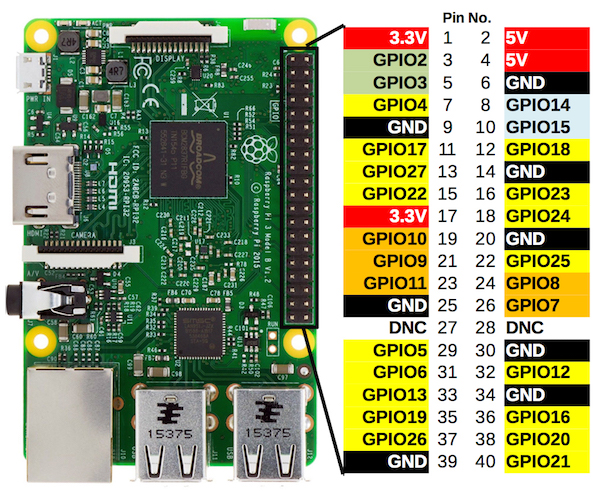 Big Mess o’ Wires gives some quick thoughts on various libraries for programming in C for the Pi’s GPIO – TL;DR: whereas WiringPi is probably the most well-known GPIO access library don’t underestimate pigpio or bcm2835, or even direct register control. Read on:

The Raspberry Pi’s 40-pin GPIO connector often gets overlooked. Typical Pi projects use the hardware as a very small desktop PC (RetroPie, Pi-hole, media center, print server, etc), and don’t make any use of general-purpose IO pins. That’s too bad, because with a little bit of work, the Raspberry Pi can make a powerful physical computing device for many applications.

Raspberry Pi vs Arduino (and other microcontrollers)

Why would you want to use a Raspberry Pi instead of an Arduino or other microcontroller (STM32, ATSAM, PIC, Propeller)? There are loads of “Raspberry Pi vs Arduino” articles on the web, and in my view almost all of them miss the mark. The Pi is not a better, more powerful Arduino. It’s a completely different type of device, better at some tasks, but markedly worse at others.

The Pi is vastly more powerful than something like an Arduino Uno. The latest Pi 3 Model B+ has an 88x faster CPU clock and 500,000x more RAM than the Uno. It also runs a full-fledged Linux operating system, so it’s much easier to create projects involving high-level functions like networking or video processing. And you can connect a standard keyboard, mouse, and monitor, and use it as a normal computer.

But the Pi operating system is also a huge weakness in many applications. There’s no “instant on”, because it takes nearly a minute for the device to boot up. There’s no appliance-like shutoff either – the Pi must be cleanly shutdown before power is turned off, or else the operating system files may get corrupted. And real-time bit twiddling of GPIO is mostly impossible, because the kernel may swap out your process at any moment, making precise timing unpredictable.

In theory it’s possible to do bare-metal programming on the Raspberry Pi, eliminating Linux and its related drawbacks for real-time applications. Unfortunately this doesn’t seem to be a common practice, and there’s not much information available about how to do it. So the Pi is probably best for those applications where you need some major CPU horsepower and some kind of GPIO connection to other sensors or equipment, but don’t need precise real-time behavior or microsecond-level accuracy.