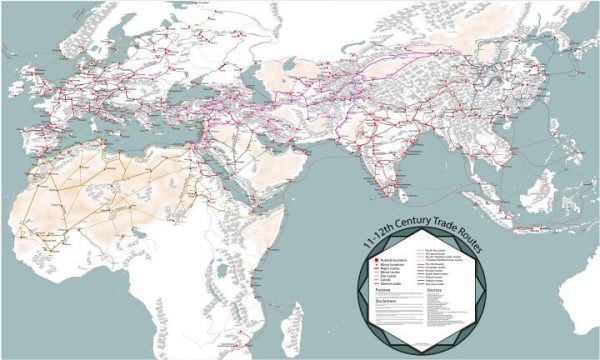 The map above is probably the most detailed map of Medieval Trade Routes in Europe, Asia and Africa in the 11th and 12th centuries you can find online. It includes major and minor locations, major and minor routes, sea routes, canals and roads.

“Even before modern times the Afro-Eurasian world was already well connected. This map depicts the main trading arteries of the high middle ages, just after the decline of the Vikings and before the rise of the Mongols, the Hansa and well before the Portuguese rounded the Cape of Good Hope.

The map also depicts the general topography, rivers, mountain passes and named routes. All of which contributed to why cities came to be, and still are, up until modern times.

The high middle ages were a time when the stars aligned in terms of commerce for many areas of the world. In central Europe many German and French cities initiated annual trade fairs, some of which are still active today – most notably in Frankfurt. The Europeans have redeveloped a demand for eastern goods as a result of the crusades in Iberia and the Levant. The Italian city states and some north eastern Iberian cities had shipped the crusaders back and forth in the Mediterranean sea, building up huge fleets and setting up networks of trade all around the Mediterranean shores. The Italians frequented ports such as Alexandria, which had separate trading ports for muslim and christian ships.

The Muslim kingdoms of Southern Iberia enjoyed a great trading relationship with Egypt and the most important sea trade route spanned between Seville and Alexandria. On the way between these two cities, Palermo on the island of Sicily became a meeting point between Muslim and christian traders. The Jewish community were a common middleman between the Christians and the Muslims.

This time saw the rise of the Sahelian cities, just south of the Saharan Desert. These cities became the worlds’ leading exporters of gold which stimulated all the markets of Afro-Eurasia. It is from these cities that Mansa Musa (Keita I) would later depart on his famous Hajj. The gold was mainly transported northward to the North African coast across the Saharan Desert. An eastward trade network towards Egypt and Sudan started to grow during this period.

Moving more eastward the Fatimids of Egypt and the Abbasids of Iraq are both trying to funnel the lucrative trade through the Nile and the Euphrates respectively. The Nile would eventually prove to be the better option since the Persian Gulf was starting to get a reputation for its notorious pirates.”