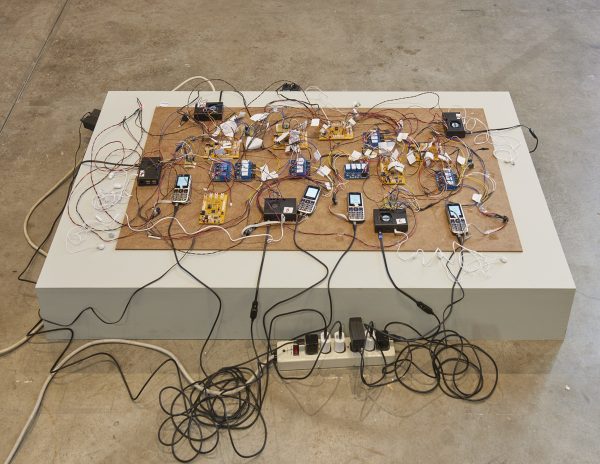 Step-by-step, a team of technicians assemble a haphazard system of wires, computer chips, and old 2G flip-phones. The men argue about how to proceed with setting up their DIY communications network, which will provide a secure and private channel for Bedouin smugglers to go about their business without the oversight of government authorities. A test of their product: the phones are ringing but nobody’s answering. And then, a line of text appears on a nearby computer monitor, “Did you see me this time? with your own eyes?” 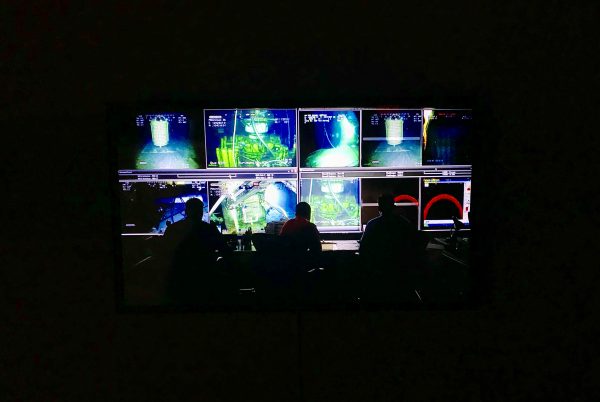 As an introduction to the SculptureCenter’s latest exhibition, 74 million million million tons, Shadi Habib Allah’s video and accompanying installation (named after the above quote) demonstrates how far contemporary artists have gone to transform their work into documentary evidence of the political threshold. Curated by Ruba Katrib and artist Lawrence Abu Hamdan, 74 million million is an ambitious if sometimes impenetrable show that uses art to explore the technological indeterminacies of modernization. Robots and refugees, climate change and surveillance operations — the exhibition speculates on the inability of technology to understand itself and its repercussions on the environment.

Similarly, Daniel R. Small (no relation to the writer) is interested in this balance between evidence and artistry. In the video labeled “Animus Mneme (Terasem Teyolía)” (2018), Small’s museological survey compares the attempts of civilizations across time to develop an archaeology that safeguard the memory of humanity. Is artificial intelligence a true preservation of human thought? Do transhumanists have a viable strategy for uploading their minds to outer space? A preemptive archaeology, Small collects various theories on the significance of human presence amidst technological and spiritual marvels. Most striking, however, is his interest in the reciprocal question: How will nature record the slights of humanity? Located in Mexico’s Temoaya municipality, the Otomi Cultural Center preserves the indigenous civilization’s practices. An imposing landscape of stone teepees and carved pillars set against a hilly forest background, the site also includes a small army of topiary bushes sculpted into the shape of extinct and endangered animals. As if describing his own guilt for environmental destruction, Small’s camera observes the topiaries with a slow, mournful pause.