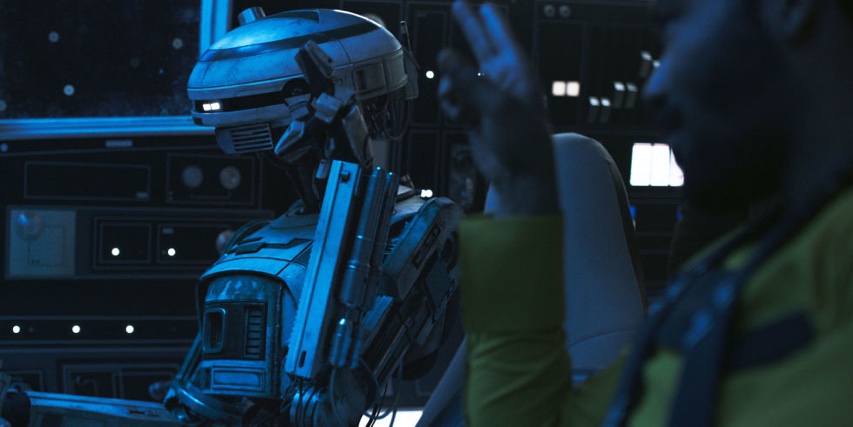 Today’s robot is L3-37 – the wokest droid in the galaxy! The best of both R2-D2 (astromech) and C-3PO (protocol), she’s the new droid everyone’s talking about!

StarWars.com – A self-made droid built from astromech and protocol parts, L3-37 is an enlightened navigator who cares deeply about droid rights. Her ability to connect directly with the Millennium Falcon’s navicomputer lets the freighter plot faster routes than those traveled by more cautious ships. L3-37’s habit of speaking her mind and her relentless advocacy for mechanicals can alienate organic beings.

A pilot droid who built herself out of a mix of astromech and protocol droid parts, L3-37 flew the Millennium Falcon alongside the freighter’s captain, Lando Calrissian. L3-37 knew Lando would be lost without her vast navigational database, and teased him about everything from his piloting skills to his lack of support for droid rights. She was initially miffed at Lando’s decision to join the Beckett gang’s risky raid on Kessel – as usual, Lando hadn’t bothered to consult her.

Fans, makers, and hobbyists have been building and cosplaying as Star Wars droids seemingly since the beginning of time. Since L3 is so new, no one’s really had time to construct their own version of her – so why don’t you give it a go and show us! Grabbing an Adafruit CRICKIT might be a good place to start!

Comments Off on ADABOX 008 is all about building #robots! JOIN NOW! Today’s Robot Archaeology #MakeRobotFriend is L3-37! @adafruit