11 Shades of Blue: A 19th Century Classification and the Perfect Words to Describe a Color 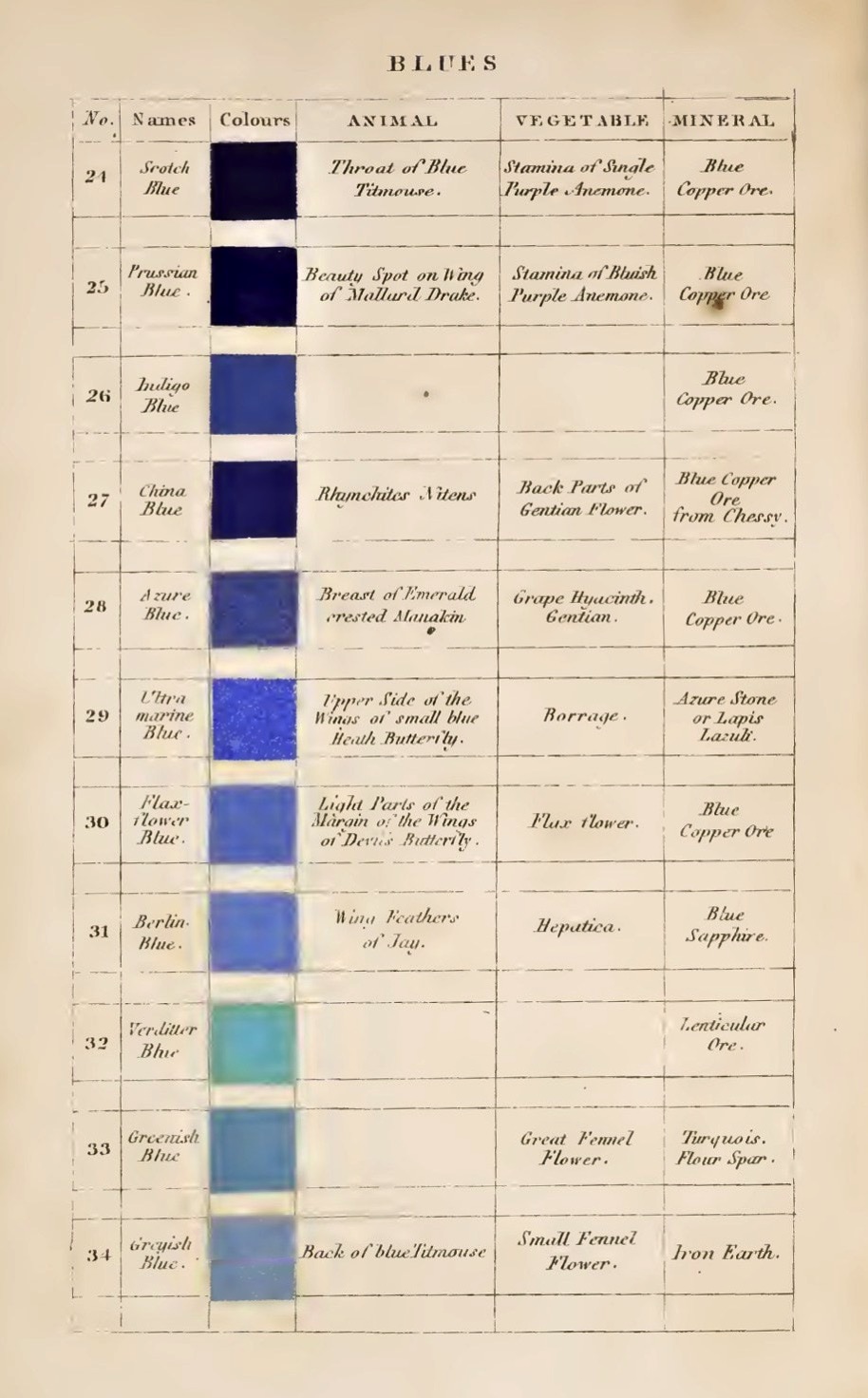 There’s not a single blue, but many. And there are few words (if any) capable of fully describing its tones which, like emotions, range from the subtle to the beautiful, always more and more difficult to translate into words. Blues, in particular, have inspired poems, paintings, and entire lives. The color of emotion, of distance, of mystery, of water, blue (among other colors) received one of its most unexpected tributes in a catalog by the German geologist, Abraham Gottlob Werner (1749-1817). It’s a classification system born in the mind of a scientist, but with its own poetic charm.

Werner worked as a mine inspector and a professor of mineralogy – fields in which he’d developed multiple theories on the origins of minerals within the Earth. In his final years, already a prominent geologist, Werner embarked on an entirely different task: the development of a nomenclature of colors. Unlike that of his contemporary Goethe (who based his on colors’ emotionalism), Werner’s was based on the tones of minerals. It was a classification system that gave a new vocabulary to the art of describing something almost indescribable. And this was at a time when photography didn’t yet exist and when words were still the easiest way to explain and to delineate.

Werner’s classification system shines both for its rarity and its specificity, but also for its precision and charm. It displays the names of unusual colors, in puns, and terms that refer to foods, plants, and objects like “Flax-flower Blue,” “Saffron Yellow,” and “Skimmed-milk-White.” The result was Werner’s Nomenclature of Colors: Adapted to Zoology, Botany, Chemistry, Mineralogy, Anatomy, and the Arts. (The entire volume is in the Internet Archive.) Published in 1821, it’s a conceptual and verbal eccentricity, a volume admired as much by the poet Novalis as by Charles Darwin.

As the name implies, the book was planned as a tool for science and the arts, although it’s incomparable with any other manual of color. Rather, it’s an heir, and in beauty, comparable to A. Boogert’s catalog, a 17th-century manual devoted exclusively to the mixing of watercolors.

To name something is to bring it into existence. To describe a color in words is an act not only of creation but a demonstration of the power of language over the imagination. Colors which, even today, are held onto like treasures, are sometimes only ideas, and Werner’s names are just that: the embryos of poems.

Blue – which according to Goethe’s theory of color has an implicit principle of darkness, a stimulating negation, a contradiction between excitement and rest – has powerful effects on our emotional lives. It’s one of the protagonists in the history of art (as can be seen in the work of Yves Klein among others). In Werner’s catalog, blue has a special place; its tones are described more as spells or dosages than properly as colors, and the words with which they’re delineated allow us to savor their nuances in acts of imagination, indeed, as acts of magic.

These are the blues named by Abraham Gottlob Werner some 200 years ago:
. Scotch Blue is Berlin blue, mixed with a considerable portion of velvet black, a very little grey, and a slight tinge of carmine red.

. Prussian Blue is Berlin blue, with a considerable portion of velvet black, and a small quantity of indigo blue.

. Indigo Blue is composed of Berlin blue, a little black, and a small portion of apple green.

. China Blue is azure blue, with a little Prussian blue in it.

. Azure Blue is Berlin blue, mixed with a little carmine red: it is a burning colour.

. Ultramarine Blue is a mixture of equal parts of Berlin and azure blue.

. Flax-Flower Blue is Berlin blue, with a slight tinge of ultramarine blue.

. Berlin Blue is the pure, or characteristic colour of Werner.

. Verditter Blue is Berlin blue, with a small portion of verdigris green.

. Greenish Blue, the sky blue of Werner, is composed of Berlin blue, white, and a little emerald green.

. Greyish Blue, the small blue of Werner, is composed of Berlin blue, with white, a small quantity of grey, and a hardly perceptible portion of red. 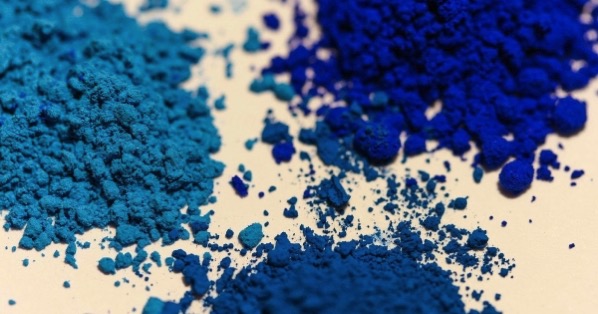 Comments Off on 11 Shades of Blue: A 19th Century Classification and the Perfect Words to Describe a Color