Since the announcement of a New York-based Maker Faire, the World Makerfaire has always been my favorite event of the year. To my surprise last year, a group of organizers out on Long Island put together a Mini Makerfaire in one of my all-time favorite seafaring towns – Port Jefferson. To top if off, they hosted this event along the ridiculously picturesque harbor-front of this town: 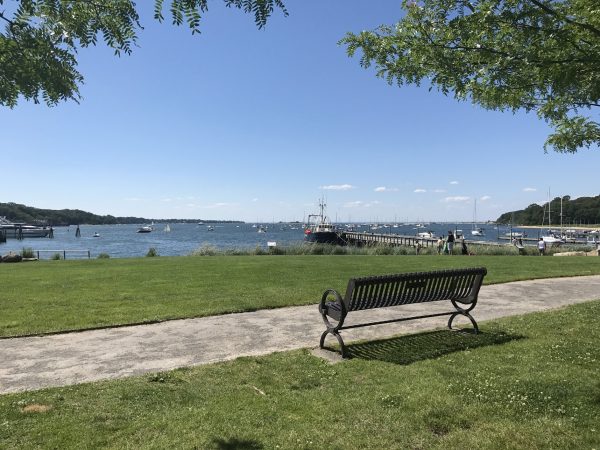 For those of you who haven’t heard of a Mini Makerfaire before,

Mini Maker Faires are independently produced celebrations of local maker culture….Despite the size of these larger events, the idea of Maker Faire can work at almost any scale.

While the larger events are great fun, Mini Maker Faires give a unique representation of what local groups, organizations, and makers produce.

To highlight this point, the Long Island Event had multiple booths by local advocacy groups and researchers about ocean-lif. You would be be hard-pressed to find tanks with living sea life to touch and scientists to explain the different types of animals at the World Wide Makerfaire: 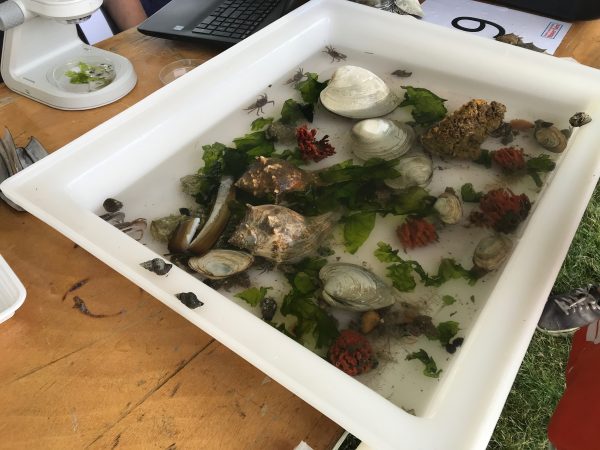 Long Island is also home to Brookhaven National Labs and Stony Brook University. There were a large amount of scientists there, either sporting a lab coat or a yellow “I’m a Scientist!”, to talk about their field of work. This is a great feature of this event, I saw a lot of kids’ faces light up when they had the opportunity to spend time talking to a scientist. 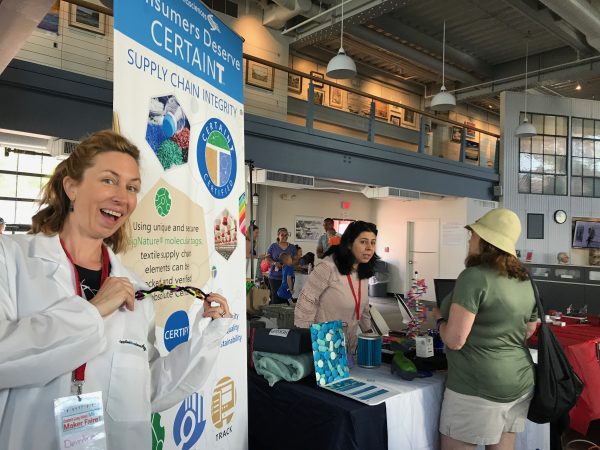 The cardboard-as-a-building-material-craze has not slowed down. A young maker showed me her cardboard creations, ranging from small animals to detailed monsters for her Dungeons and Dragons campaign: 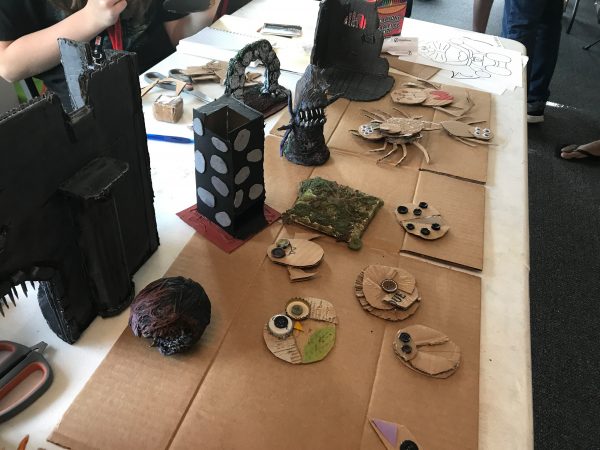 Kurt Wend (also known as Bot-Guy) was showing off his HUGE dragon project. What initially started out as a 4.5 foot dragon has spread to a creation spanning over nine feet. The body of the dragon is 3D Printed and the neck is printed in transparent-PLA filament to show off the RGB-LEDs underneath. I talked to Bot-Guy about the possibility of adding NeoPixels to the scales and showed him the Adafruit Animated Eyes Bonnet. 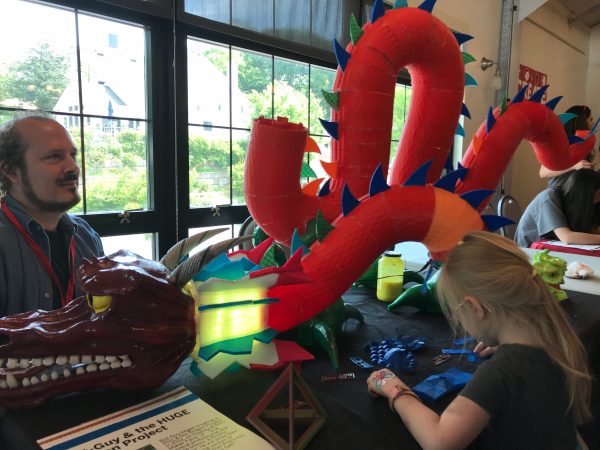 Bot-Guy also excitedly showed me a 3D printing experiment he’s been working on. I’m holding dragon scales which are printed in hard plastic. He printed them on top of a thin mesh-like material to be used in cosplays. While the kinks are still being worked out, it’s a fun wearable experiment. 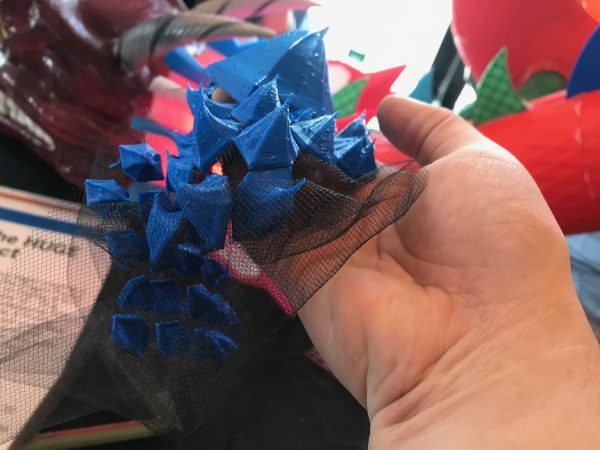 Moria Chas, an professor of mathematics at the nearby Stony Brook University, showed off her crocheted math-shapes. She had shapes ranging from a torus to a shape I mistook for a mobius strip and certainly lost “nerd-cred” for (it was a double-twist mobius strip). Also these shapes were soft 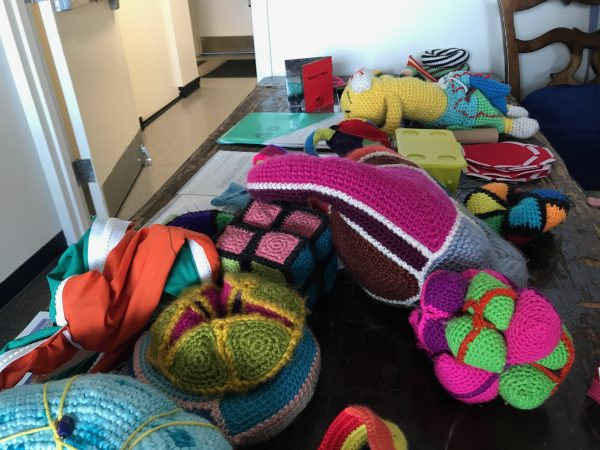 Rant and Rave’s Air Rocket Launchpad was in full-effect. The maker was dressed up in a mad-scientist outfit and assists with making rockets out of paper and shooting them into the sky using a large air-compressor. 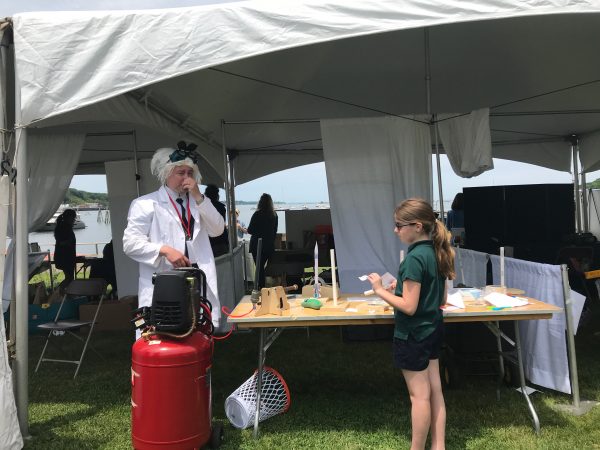 Maker Ray Rumore (a fan of Adafruit) was also there with his highly impressive robot, Volt. He eagerly showed me how his robot could be controlled remotely and wanted to put more lights onto it. He was also excited about the Crickit, and was excited to see that I happened to have one with me for demonstrations. Ray ended up with the Crickit and Circuit Playground Express in my backpack in agreement that he’d build something great with it and show it off on the Adafruit Show and Tell: 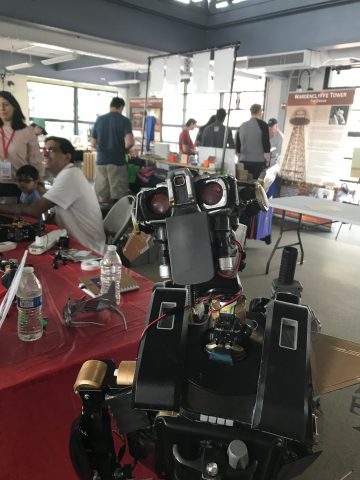 The Tesla Science Center at WardenClyffe was also at this event with experiments in-tow. While I’ve seen my fair share of Arc-Attack concerts at larger Maker Faires, Nikola Tesla never fails to disappoint me. One exhibit they had was a reproduction of Nikola Tesla’s original DC motor from the Tesla Museum in Belgrade. This was a unique piece and will be on-display  in the Tesla Science Center when it opens soon. 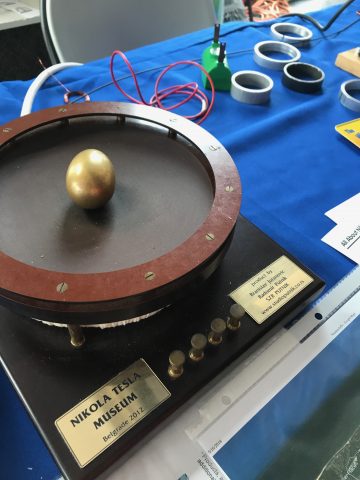 I’d like to extend my thanks to the volunteers and organizers at Eastern Long Island Mini Makerfaire for the hard-work required for putting on this special event. While my visit did not last all-day like it would at a larger event, there was something special about this mini event which left me driving back with a smile on my face 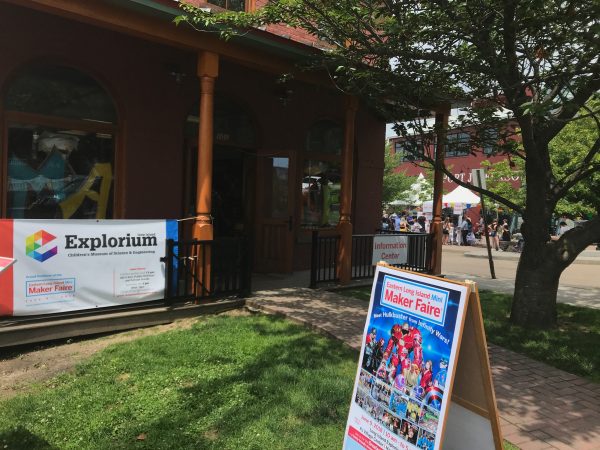