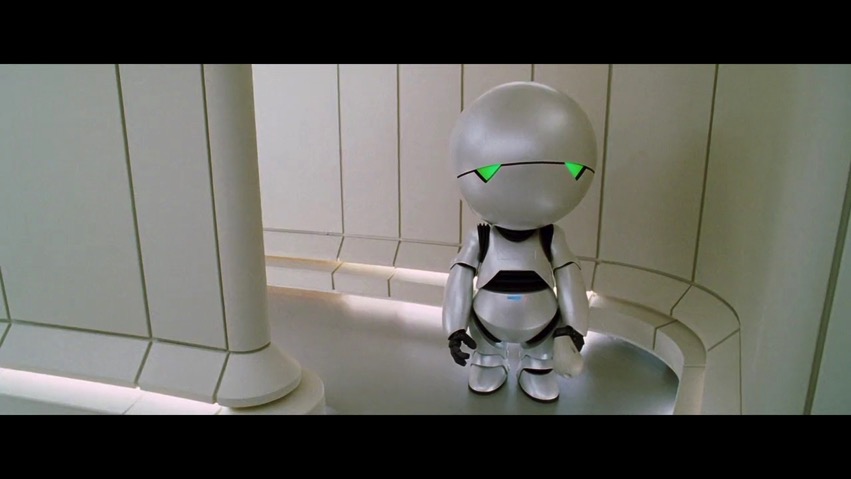 Today’s robot is Marvin from Douglas Adams’ The Hitchhiker’s Guide to the Galaxy!

Hitchhikers Wikia: Marvin, more fully known as Marvin the Paranoid Android, is a robot manufactured by the Sirius Cybernetics Corporation. He is equipped with “Genuine People Personalities” (GPP)  technology which is designed to make him more like a person.

Marvin continually says that his brain is the size of a planet (in fact because of this, he is eternally bored because nothing takes up his entire mind), enabling him to calculate the probability of just about anything. However, when he bothers to share the fruit of his mental labours with those around him, they tend to ignore him because he usually just ends up depressing them.

In his spare time, which has been legendary because any time that he commits to thought processes necessary to perform any assigned duties takes up such a small percentage of his brain, and with all of the traveling through space and time performing assigned duties have rendered him many times over the span of the universe, he has been known to write and sing songs; just not very good ones and not very well.

Novel(s): He’s described as “… though it was beautifully constructed and polished it looked somehow as if the various parts of its more or less humanoid body didn’t quite fit properly. In fact they fitted perfectly well, but something in its bearing suggested that they might have fitted better.”

Movie: Marvin is short with an oversized spherical head, sleek surfaces but a comical design.

Take a looksie at a fun EVA foam Marvin cosplay here. We also came across this adorable DIY Marvin crochet creation! Create your own and share with us!

Comments Off on ADABOX 008 is all about building #robots! JOIN NOW! Today’s Robot Archaeology #MakeRobotFriend is Marvin! @adafruit