Portraits of Arab Immigrants and their Descendants #CelebrateImmigrants. #IHM2018 #ImmigrantHeritageMonth 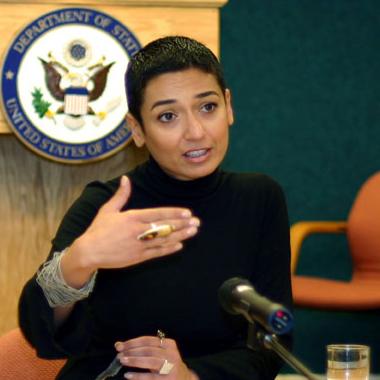 The Arab American Institute has a great monthly series, Portraits of Arab Immigrants and their Descendants:

In celebration of the fifth annual Immigrant Heritage Month, AAI is continuing our “Together We Came” campaign to highlight outstanding Arab American immigrants and their descendants who have had an indelible impact on the vibrancy of our nation. Now more than ever, it is crucial that we celebrate immigrants and share their stories. In times of bigotry and fear, these stories remind us that the United States is a nation defined by diversity and the contributions of countless immigrants from all over the world.

From creating the first artificial heart to sending the shuttle into space, the Arab American community has been an important part of our country’s growth and success.  Click here to share your own immigrant story or email it to us at communications@aaiusa.org.

Here’s a selection from Together We Came: Zainab Salbi

Salbi is the founder of Women for Women International, a grassroots development and humanitarian organization that assists women survivors of war which was recognized with the Award for International Achievement at AAIF’s 2006 Kahlil Gibran Gala. Salbi served as CEO of Women for Women International for almost twenty years, authored three books, hosted television shows, and has been recognized for her work in countless ways. To say Salbi is influential would be an understatement. Her drive towards humanitarian work is political, but also very personal.

Salbi was born in Baghdad, Iraq. From a young age, Salbi was very conscious of the world around her. Everything changed for Salbi during the Iraq-Iran War. Not only did Salbi learn about the fragility of life, but she also learned that her parents knew Sadam Hussein. Her father was Hussein’s personal pilot, and their family had a social relationship with Hussein. He was the man she called ‘Uncle;’ he both offered them his weekend beach house and instilled fear in the lives of families across the country, including her own. Salbi’s memoir, “Between Two Worlds: Escape from Tyranny: Growing Up in the Shadow of Saddam,” recounts what it was like living within Saddam’s circle. She remembers, “Saddam ordered our fathers, they ordered our mothers, and their daughters ordered us. They were all Saddam.” Salbi knew to be afraid.

In 1990, Salbi’s parents sent her to Chicago. Her parents arranged for her to marry an Iraqi immigrant to get her out of Iraq and to safety. At least, presumed safety. At 19 years old, Salbi was raped by her husband. She remembered the words of her mother: you must be strong. A resilient survivor, Salbi immediately left her husband.

After moving to Washington, D.C, Salbi worked her way through college. She graduated from George Mason University with a Bachelor of Individualized Study degree in sociology and women’s studies, and then earned a master’s degree in development studies from the London School of Economics.

In 1993 Salbi was living in the United States. During this time, Salbi learned about wartime rape camps in Bosnia-Herzegovina and Croatia. After first reading about survivors of these camps in a Newsweek article, Salbi followed the plight of these women in the news and became increasingly invested in their survival.