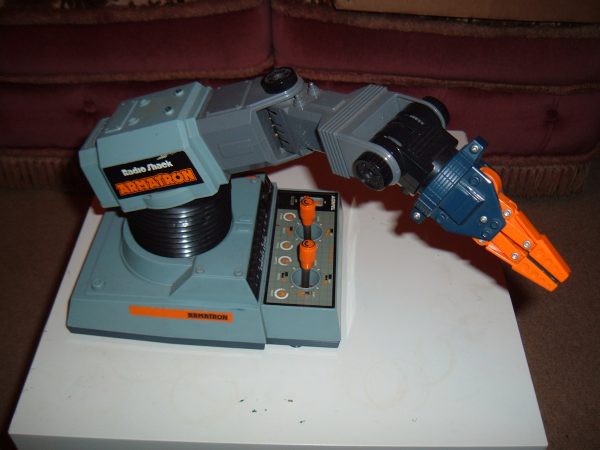 A great teardown article by Sci Turpin! He talks about finding a Tandy/Radio Shack/Tomy Armatron robotic arm from the late 70’s to mid 80’s.

He states (emphasis mine):

While the magic of a robot arm has perhaps faded a little, it was the conversion of one to steam by CrabFu Steamworks that pointed out the unique property of this toy. The whole thing is driven from one electric motor. The full 6 degrees of motion are driven entirely mechanically, via two joysticks. The CrabFu article had one tantalising view of the mechanism within, but no details on how it actually managed to channel the power via joysticks. I had to know how this gearbox worked!

Most arms these days have multiple servos or motors, using one with gears is insane engineering. In the teardown we finally see how this magic is accomplished: 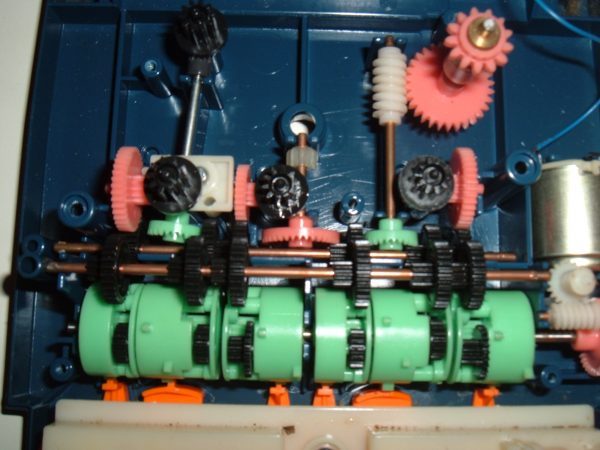 The joystick pins at rest sit against the wider centre stud of each carrier’s outer surface. There are two type of carrier in this gearbox. Two shorter ones that run from the turning motion of the joysticks to the claw (E) and wrist (F). The four longer carriers have 5 studs on their circumference, while the short ones have three. the longer carriers also have two gears, while the shorter ones just have one.

With some coaxing of the motor, the way this works became obvious quickly.

A complete teardown with pictures, explanations, and the detective work on the tiny reason one part wasn’t working in his fantastic write-up.

Do you like gears, cams, and sprockets better than wires and electronics? Let us know in the comments!