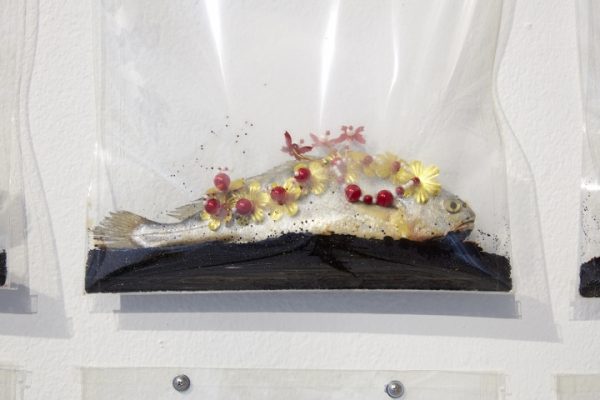 As a number of art news outlets have reported, Lee Bul’s sprawling solo exhibition at London’s Hayward Gallery did not open last week as scheduled, thanks to the botched removal of a work titled “Majestic Splendor.” The installation consists of dead fish decorated with kitschy beaded bracelets and fake jewels, each one resting in small plastic bags pinned to the wall in a grid. Lee, a South Korean artist known for her eclectic, often dystopian work across mediums, began making a version of the work in 1991 (with the fish individually sequined by hand) and has since installed it a number of times at institutions around the globe. Over the course of each exhibition, the fish are left to rot, creating a fetid smell that permeates the gallery.

At least one iteration of “Majestic Splendor” — an infamous showing in the Projects series at the Museum of Modern Art in New York in 1997 — had to be removed because the stench was so overpowering that it made guards physically ill, and so far-reaching that it wafted up to the restaurant. (Thanks to MoMA’s Press and Archives staff, this writer learned that the problem primarily stemmed from a faulty refrigerator unit that held some of the fish; when the unit was hastily removed from the show, Lee pulled the rest of the work, too.)  In recent years, the artist has added potassium permanganate to the plastic bags to neutralize the smell. A compound with myriad uses ranging from disinfecting water to treating fungal infections, potassium permanganate is highly flammable in combination with other chemicals — in fact, it’s included in survival kits as a fire starter and serves as the primary material in plastic spheres manufactured to create controlled burns on ranges or in wildfire situations.

Having belatedly come to terms with the clear danger posed by potassium permanganate, Hayward decided to pull the fish from the show only hours before the preview, lest anything accidentally blow up. The joke, as it were, was on the gallery, as the deinstallation of the work sparked a small fire, causing enough damage to delay the opening. The story sounds like it’s been pulled straight from the annals of The Onion, a tale of vengeful bedazzled fish that illustrates the absurdity of contemporary art, and the lengths to which galleries and museums are willing to go to realize works that are dangerous to the institutions that harbor them.