In celebration of the many benefits immigration has brought to this country here is an interesting article from Pro Publica about the potential boon immigration could have for the US economy. There is also an interactive graph you can play with showing the predicted effect of different immigration rates. 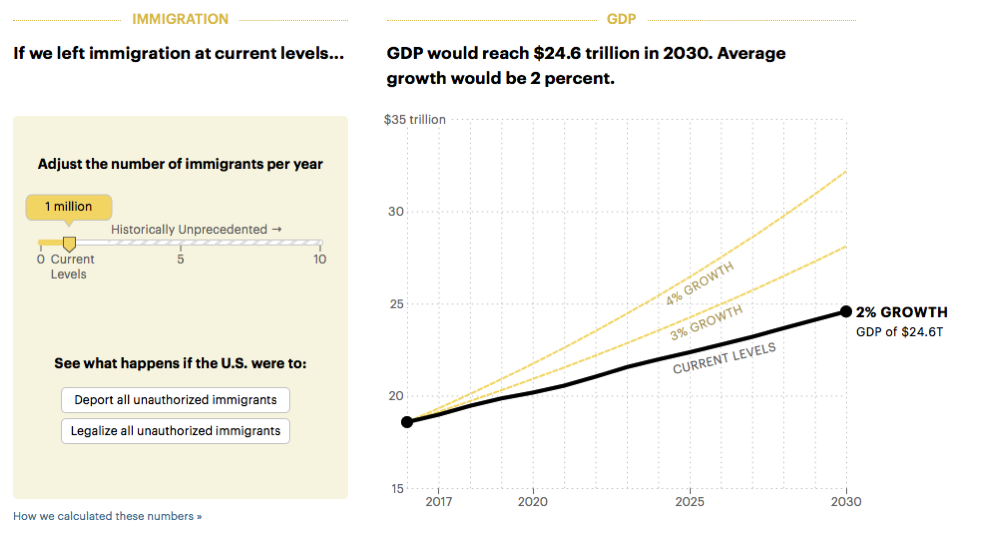 In an analysis for ProPublica, Adam Ozimek and Mark Zandi at Moody’s Analytics, an independent economics firm, estimated that for every 1 percent increase in U.S. population made of immigrants, GDP rises 1.15 percent. So a simple way to get to Trump’s 4 percent GDP bump? Take in about 8 million net immigrants per year. To show you what that really looks like, we’ve charted the effect below. You can see for yourself what might happen to the economy if we increased immigration to the highest rates in history or dropped it to zero – and everything in between.

“Immigration is a great economic policy opportunity and it’s important to document the impact of that,” said Douglas Holtz-Eakin, an economist who served on the President’s Council of Economic Advisers in both Bush administrations. He agreed with the basic conclusions of Moody’s analysis, and said that 1.15 percent was a reasonable estimate of the effect of immigration on GDP.