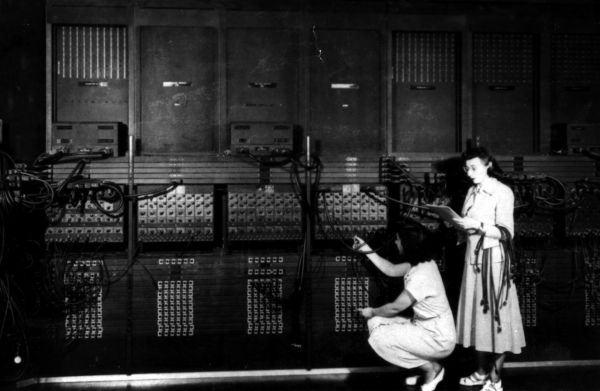 From the Engineering and Technology Wiki:

Marlyn Meltzer was born as Marlyn Wescoff. After graduating from Temple University in 1942, she was hired by the Moore School of Engineering of the University of Pennsylvania to perform weather calculations as she knew how to operate an adding machine. In 1943, she was hired to calculate ballistics trajectories. The Moore School at UPenn was funded by the US Army during the Second World War. Here a group of about 80 women worked manually calculating ballistic trajectories – complex differential calculations. These women were called ‘computers’. In 1945, the Army decided to fund an experimental project – the first all-electronic digital computer and six of the women ‘computers’ were selected to be its first programmers. Among these six was Marlyn Meltzer.

The ENIAC was the first all-electronic digital computer, a huge machine of forty black 8-foot panels. The programmers had none of the programming tools of today and it was a challenge to make the ENIAC work. The six programmers had to physically conduct the ballistic program using 3000 switches and dozens of switches and digital trays to route the data and program pulses through the machine. Marlyn Meltzer was in a special team with Ruth Teitelbaum within the ENIAC project. They used analog technology to calculate ballistic trajectory equations. In 1946, the ENIAC computer was unveiled before the public and the press. The six women were the only generation of programmers to program the ENIAC. Though mentioned in the Woman of the ENIAC, Marlyn Meltzer and the other women did not receive due recognition at the time.

Marlyn Meltzer resigned from the team in 1947 to get married before the ENIAC was relocated to the Ballistics Research laboratory at Aberdeen, Maryland. In 1997, Meltzer was inducted into the Women in Technology International Hall of Fame with the five other original programmers of the ENIAC.

Here’s more on the history of the ENIAC from the Computer History Museum: