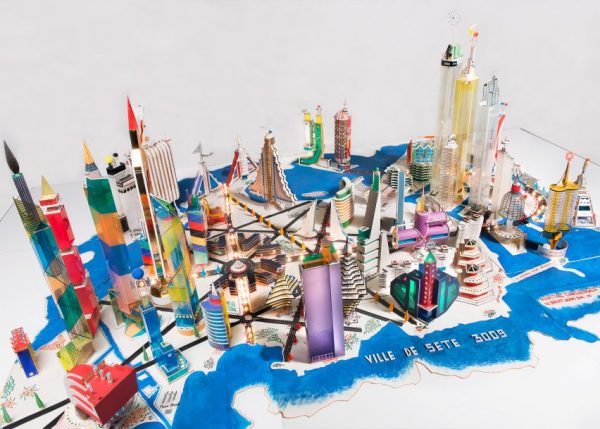 The exhibition features the colourful, craft-like models that depict Kingelez’s ambitions for the future built environment of Africa
Starting with single buildings and then transitioning into sprawling, carnivalesque city complexes – which he described as “extreme maquettes” – the exhibition follows the trajectory of his career. The featured works are a selection from the hundreds of models he created between 1980 to 2007.

Among the models is Kimbembele-Ihunga, imagining a small agricultural village as a bustling metropolis
Among these is a trio of imaginary urban buildings displayed together, and completed successively in 1990, 1991 and 1992. They include Étoile Rouge Congolaise, designed as a court of wisdom focused on artwork and knowledge; Aéromode (Aéroport Moderne), a modern airport building; and Reveillon Fédéral, a democratic government building with a temple-like structure.

Comments Off on African Metropole Models by Isek Kingelez #ArtTuesday