I was delving a bit deeper into my own blog about an interview with Mike Elizalde from Spectral Motion, whose interview at v-e-n-u-e included this awesome shot: 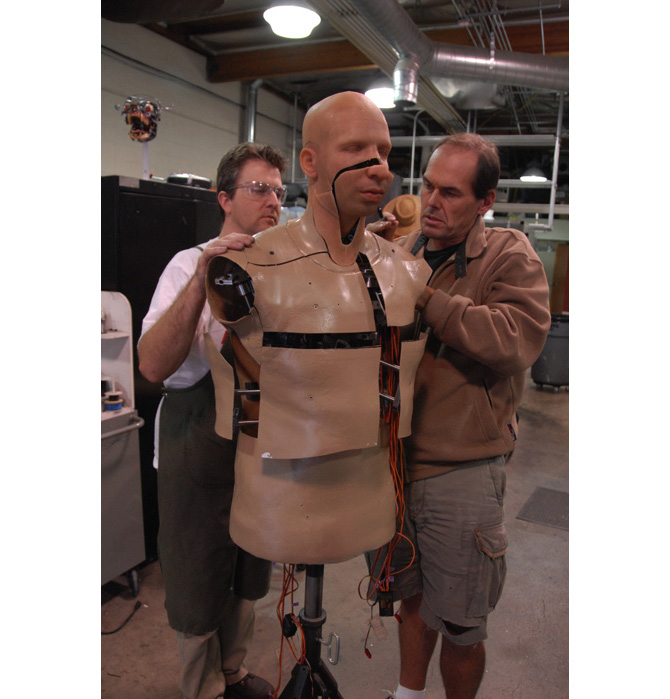 (Note the incredible dog / bear / animal head on the cabinet seen over Scott Millenbaugh’s right shoulder – what is that thing!?)

I was really curious about that… puppet / mech / animatronic / bot mannequin, and wanted to know more. The caption references a commercial for the lemon-lime flavored fizzy drink Sprite. But I haven’t had television since shortly after 9/11 – so a 2010-era commercial was way down on my list of anything I could recall or have a familiarity with seeing. So I looked it up:

Even having watched the commercial, you’d think everything was done in computer graphics – I certainly did. But, there was that picture above of a real-world “mechanical puppet.” I couldn’t reconcile the two, so I dove a little deeper!

The commercial is the product of agency Bartle Bogle Hegarty‘s NYC office, the puppet was created by Spectral Motion and then completed by Montreal’s The Workshop, who write,

The process included creating both 3D generated and live action and the seamless integration of the two. It began with a complete body scan of Drake. We then created a 3D model of him and cut him into the pieces we wanted to move. The model was then sent to the effects house and they created an animatronic puppet of Drake. On set we used a motion control camera and perfectly aligned Drake’s last position to match the robot clone of him. Using the same camera movements we shot the puppet exploding. In post, we regenerated the footage of Drake to align with the movement of the robotic puppet and created the 3D liquid simulation of the water moving through him.

Even the ‘splash’ effects were real-world (at least for reference, for the CG operators), as captured by numerous clips at reelfx.com:

I’m fascinated that so much work went into a 1-minute ad spot, and involved real-world film, animatronics and mechanical parts, photogrammetry, 3d-modeling, audio composition, and more. Also Drake has a new album out today, so this seems serendipitous!