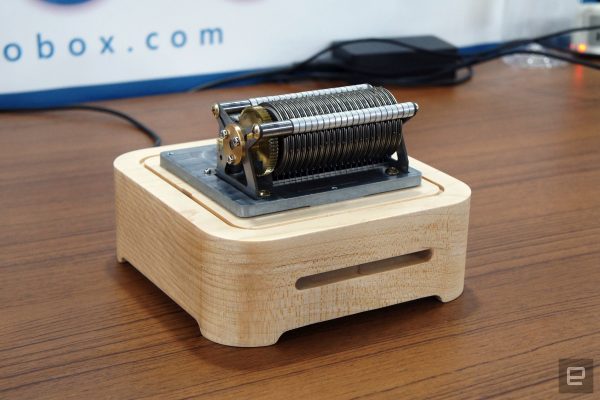 Outside horror movies, music boxes are pretty cool, but their big flaw is that they can only play a few bars of one song. This inflexibility wasn’t so much of an issue a century ago, but in the era of Spotify, it’s not great. That’s why Taiwanese company Tevofy Technology has sought to update the music box for the modern age, in the form of the Music Robot Box, or Muro Box.

Traditional music boxes have a cylinder of pins that, as they turn, pluck the tines of a steel comb that, as they vibrate, make a sound. The principles are similar to that of hammers hitting piano strings, although you’re limited by the size of the cylinder and the notes the comb has been cut to play. The difference between that and Muro is that the cylinder has been replaced with several computer-controlled rings.

Each ring has a different number of pins and can spin around at various speeds, meaning that Muro can play up to 4 beats per second. Plus you’re not limited by the size of the cylinder, since the wheels can spin around to play pretty much anything you want to listen to. And unlike projects like the XOXX Composer, Muro actually uses a real steel comb rather than outputting to a synthesizer.

Comments Off on Muro Box: The Music Robot Box