‘Everything goes better with Pi’ – even the Apple II! | #retrocomputing #piday #raspberrypi @Raspberry_Pi 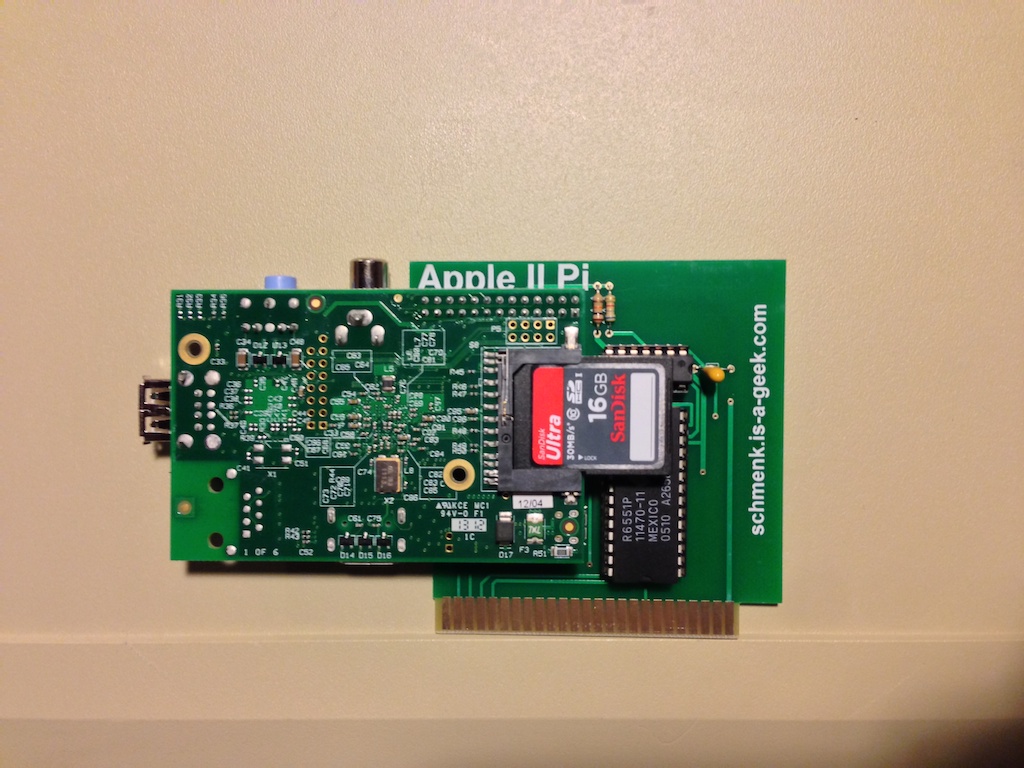 This is an old-school project in several ways, for connecting an older Model B Pi to the antique Apple II – a couple videos below show the project in action, and there’s even a complete User Manual for the project. You can see more pictures of the board here and read more about it here and elsewhere on the schmenk.is-a-geek blog.

Apple II Pi is a very sophisticated product: it can be as complicated as you want it to be, or as simple as
you want (and willing to buy). Your dealer will have options available from a plug-in, turnkey system
to a build-it-yourself kit. You will have to become somewhat familiar with Linux, even if it is just the
log in procedure. But the more you invest, the more you will get out of your Apple II Pi. The Apple II
Pi’s operating system is Raspbian: an industrial strength, modern Linux distribution. The Apple II Pi
can run the full suite of Raspbian software packages available for free, including web browsers, mail
clients, powerful office productivity applications, and a full spectrum of programming tools. With
GSport, you will have almost every Apple II application and game available, using your real Apple II
hardware.

The Apple II Pi adapter card can connect to the Raspberry Pi two ways: an internal, directly attached
Raspberry Pi and an externally, ribbon cable attached Raspberry Pi. The internal mount is a neater
installation but it is very restrictive: it only works in an Apple //e with added cooling fan and access to
the video/audio ports is limited. All others should use the external attachment.

This manual will take you through the steps to install and access the features of the Apple II Pi.
However, many of the capabilities of the Raspberry Pi, and Linux, are beyond the scope of this manual.
You are encouraged to use the links at the end of this manual, Internet resources, and even your local
library to learn more about the technology and features included with the Apple II Pi. 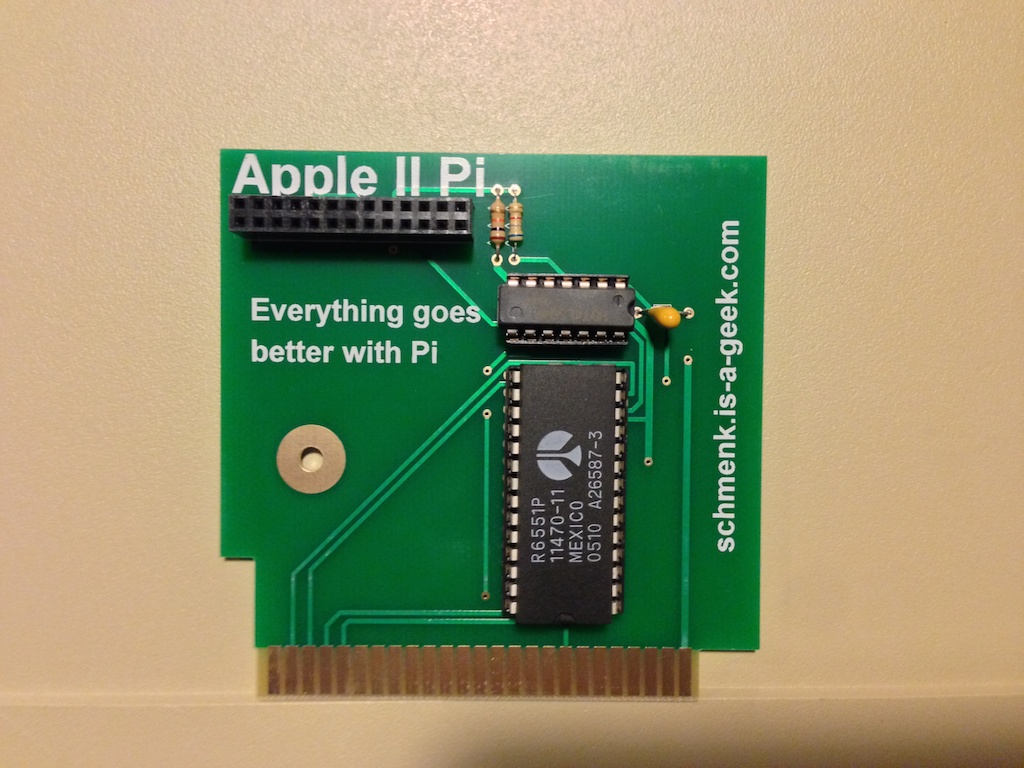 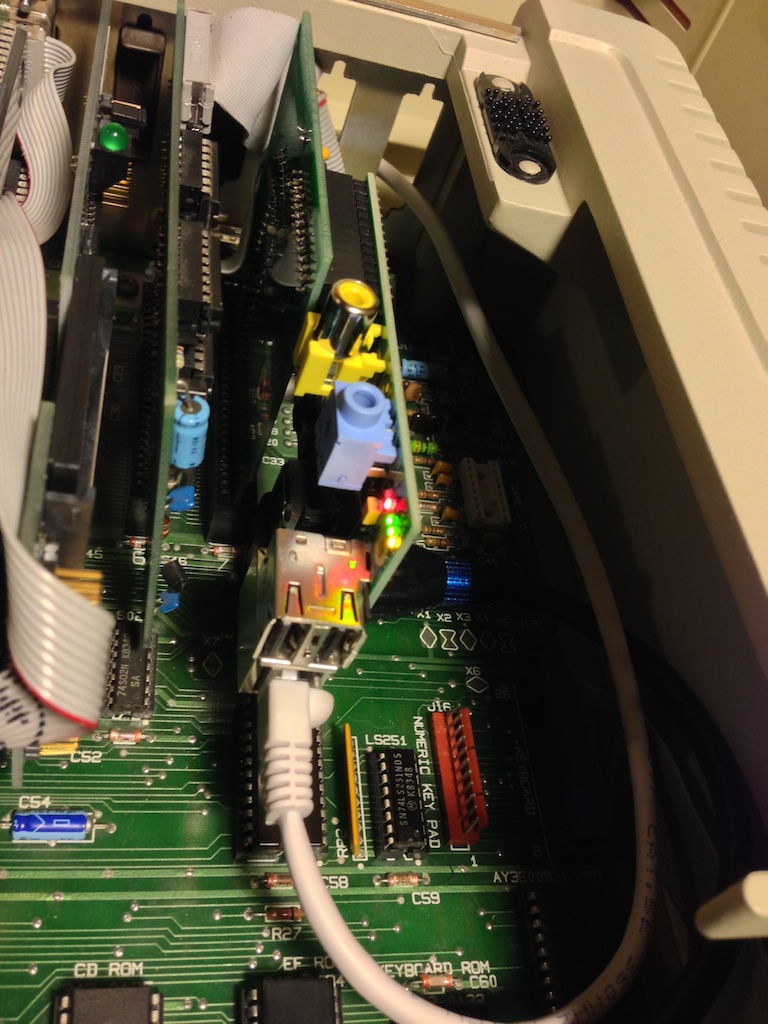 Basically, the Apple II Pi is the integration of an Apple II with a Raspberry Pi (http://www.raspberrypi.org) to create a hybrid computer combining the input devices and storage mediums of the Apple with the CPU, GPU (graphical processing unit), USB, and network capabilities of the Broadcom BCM2835 SoC (think smartphone processor).  The concept is to create an updated version of the Apple II using some imagination, low-level drivers, off-the-shelf hardware, and a closely coupled communications channel; thus bringing semi-modern hardware and 32 bit *nix software to the Apple II platform.  The Apple II is running as a dedicated I/O processor for the Raspberry Pi under ProDOS.  The Raspberry Pi is running a version of Debian Linux: Raspbian.  Much like the PC Transporter card brought MS-DOS and the Z-80 card brought CP/M, the Apple II Pi brings Linux to the Apple II using the Apple’s input devices and the Raspberry Pi’s video output.  As such, knowledge and familiarity with Linux is required to get the most out of its environment.  Under Linux, the Apple II Pi can read and write the Apple’s storage devices (floppies/harddrives/CFFA) and also run the GSport Apple IIgs emulator (http://gsport.sourceforge.net).  Together, GSport and Apple II Pi provide an immersive environment providing access to most of the Apple II hardware you own plus an accelerated ~20MHz 65816 with up to 8 MB RAM, and all the disk images you can fit on the SD card.