Buried by the Ash of Vesuvius, These Scrolls Are Being Read for the First Time in Millennia 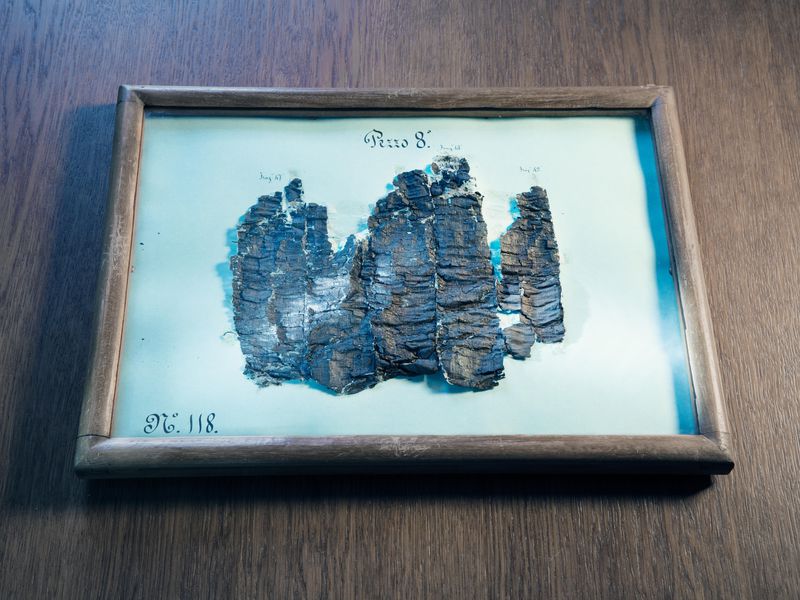 Awesome story from Jo Marchant up on Smithsonian.com.

It’s July 12, 2017, and Jens Dopke walks into a windowless room in Oxfordshire, England, all of his attention trained on a small, white frame that he carries with both hands. The space, which looks like a futuristic engine room, is crowded with sleek metal tables, switches and platforms topped with tubes and boxes. A tangle of pipes and wires covers the walls and floor like vines.

In the middle of the room, Dopke, a physicist, eases the frame into a holder mounted on a metal turntable, a red laser playing on the back of his hand. Then he uses his cellphone to call his colleague Michael Drakopoulos, who is sitting in a control room a few yards away. “Give it another half a millimeter,” Dopke says. Working together, they adjust the turntable so that the laser aligns perfectly with a dark, charred speck at the center of the frame.

Dozens of similar rooms, or “hutches,” are arrayed around this huge, doughnut-shaped building, a type of particle accelerator called a synchrotron. It propels electrons to near light speed around its 500-meter-long ring, bending them with magnets so they emit light. The resulting radiation is focused into intense beams, in this case high-energy X-rays, which travel through each hutch. That red laser shows the path the beam will take. A thick lead shutter, attached to the wall, is all that stands between Dopke and a blast of photons ten billion times brighter than the Sun.

Comments Off on Buried by the Ash of Vesuvius, These Scrolls Are Being Read for the First Time in Millennia