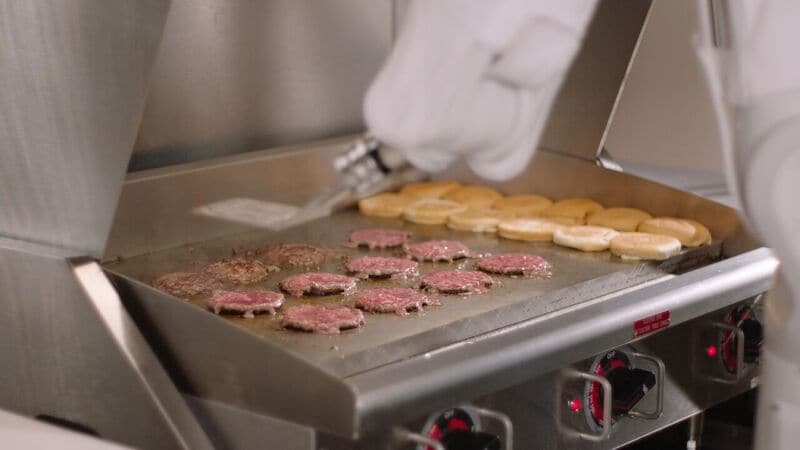 In March 2018, The Washington Post reported that fast-food restaurants experience as much as a 50 percent staff turnover each year, and one would have to assume this number is even higher in many locations. Low wages and the availability of a variety of other similar employment opportunities mean that this market remains fluid, leading to an expensive cycle of recruiting and training.

A New Way to Flip Burgers
While better wages and benefits are the normal way to recruit and retain employees, one innovative solution implemented in March 2018 at a Pasadena, California, CaliBurger location was to simply bolt the employee to the floor. Seriously. While this would get any human manager or restaurant owner in trouble with several organizations—including local law enforcement—in the case of “Flippy,” a burger-flipping robot, its confinement to a burger flipping work cell isn’t a problem. In fact, it’s a very good thing, as the cooking area is monitored by laser safety scanners to protect coworkers from its rapid-fire grilling movements.

The only problem with this robot—designed to churn out 150 burgers per hour—is that it became so popular in its initial use that it couldn’t keep up with demand and had to be temporarily decommissioned. While the future for Flippy seems bright, one of the issues that could hinder its overall performance is that while humans can adapt to each other in a kitchen, Flippy works around its own schedule and humans must assist in placing spices, cheese, and condiments on the burgers to keep things going.

Physically, Flippy resembles something more akin to an industrial robotics cell, or even a humanoid science-fiction burger droid, than traditional kitchen equipment. It takes the form of a six-axis robotic arm positioned in front of a grill surface. A human tender places and arranges the burgers on the grill, then Flippy goes to work, flipping the patties when necessary and finally placing them in a basket when done. It uses computer vision and thermal imaging to detect the position of the burgers and cooks the patties based on a schedule that CaliBurger requirements dictate. Burger patties, unlike parts customarily seen in a manufacturing environment, change shape, shrinking when grilled. Flippy’s AI system learns as it cooks, which is a process that assists with visual tracking—so, even as a human’s performance should improve, Flippy’s grill-tending performance should improve over time.

This bot features the ability to implement automatic tool changes, swapping out spatulas when critical, reserving one spatula for raw burgers then another for cooked meat. In this way, it can isolate any contamination, keeping humans safe while meat is cooked consistently, burger after burger after burger. It can also pick up a grill scraper and reportedly does a better job at cleaning the grill than an average line cook. In fact, the system is capable of hardware and software upgrades over time, so perhaps in the future, it will be able to handle patty and condiment placement by itself.

The Technology Behind Flippy
Miso Robotics is the company behind this system for CaliBurger. Miso Robotics used its Fanuc LR Mate 200 iD/7L long-arm, mini robot as the model for Flippy’s design. This bot is fast at handling small payloads, and as a compact, multipurpose, industrial robot, it offers an enhanced reach (911mm). Robots such as Flippy require coordinated motor control to operate successfully. Robots use a variety of motors including servo, spindle, linear, and torque. To successfully control these motors, the inclusion of proper electronic-motor-control components are essential.

As a leader in microcontroller, mixed-signal, analog, and Flash Internet Protocol (IP) solutions, Microchip Technology is well-positioned to deliver the necessary innovation not only to keep pace with but to lead in the burgeoning field of robotics. Microchip Technology’s PIC32MK Industrial and Motor Control MCUs offer a range of communications peripherals combined with a rich feature set of high-performance analog-motor-control functions. All PIC32MK devices feature a 120MHz, 32-bit core that supports Digital Signal Processor (DSP) instructions.

Miso Robotics recognizes that human and robot interaction must be safe. With this goal in mind, they have placed Occupational Safety and Health Administration (OSHA)-compliant laser sensors on Flippy so that staff can collaborate with the robot without harm. To perform his job, Flippy has 3D and thermal scanners for robotic vision and cloud-connected Miso artificial intelligence (AI) as its thinker. Flippy’s unique design precisely suits safe and efficient operations within an existing commercial kitchen layout with a kitchen staff that fulfills a variety of cooking tasks, because the design allows all customer-order integrations to flow smoothly between the point-of-sale (POS) system and Flippy.

The Trend Continues
For now, fast-food workers aren’t going anywhere, but they will be assisted more and more by robots and electronic systems that work alongside them. In one form or another, the use of non-human systems has been ongoing, as ordering is now electronic at most establishments that no longer rely on a paper-ticketing system, and microwaves—for better or worse—heat food at a moment’s notice.

Comments Off on Flippy the Burger-Flipping Robot #Robotics