The Terminator franchise is remembered for its incredible direction, strange moments of robotic perspective, and landmark special effects. Take the liquid metal T-1000 robot that was able to melt its way through gaps in bars or holes in windows. It was one of the first uses of computer-generated graphics on film, and yet it was so artfully executed that it will still give you shivers when rewatching the film today.

The movie’s interfaces, in particular, are some of the most iconic in film history. So, when Adobe was searching for a project to advertise the capabilities of Adobe XD, its free UX/UI prototyping software, the company quickly honed in on the idea of redesigning a few of the 1991 film’s on-screen interfaces. Specifically, Adobe wanted to update Terminator 2′s first-person HUD, or heads-up display, which is used by Arnold Schwarzenegger’s T-800, with a more contemporary aesthetic as a way of showing off the power of XD. To stack the deck in its favor, Adobe hired Territory Studios, known for designing UIs in sci-fi films like Avengers: Infinity War and Blade Runner 2049, to collaborate on the project.

Adobe licensed two specific frames to redesign, each of which features the red-tinted point of view of a killer robot attempting to make sense of the world around it. If you remember Terminator 2, the T-800 lands naked in the modern day and begins scanning for clothing and a sick ride. Nonsense numbers fill one corner of the Terminator’s screen, while the interface outlines shapes of objects for identification. This classic footage is really a beautiful play to signal computer vision to the audience, and not all that different from the bounding boxes that companies use to train vision AIs of today.

“The originals we saw as defined by the outline. We didn’t want to lose that outline,” says Marti Romances, creative director and cofounder of Territory Studios. “There’s some stuff on the sides [of the interface] we added as what if we could have more info than just the model. Fuel, things like this. It was just trying to give it a modern take of what they did on the original film.” 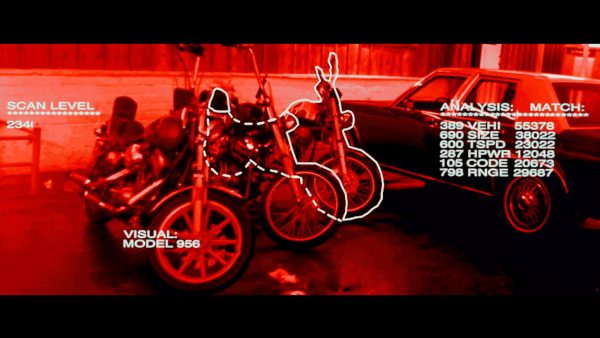