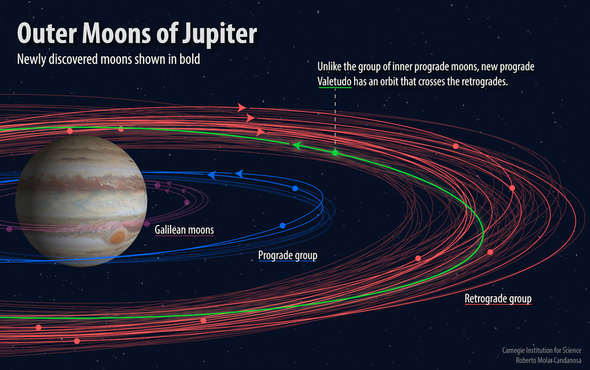 How many moons does Jupiter have? If you said four, you might be Galileo. If you said 69, you were right. Until the announcement this morning by the International Astronomical Union of the discovery of an additional 10 moons about the gas-giant planet. Bringing the currently known total to 79. That’s a lot of moons.

A research team from the Carnegie Institution for Science, the University of Hawaii and Northern Arizona University was looking in 2017 for very distant objects in our solar system, well beyond Pluto. Jupiter happened to be in the same field of view, so they also looked for any as yet unknown moons. They found 12, two of which were announced last year. Confirmation of the moons required multiple observations, and those data enabled a calculation of the moons’ orbits.

Nine of the dozen moons are well away from Jupiter and have retrograde orbits, meaning they go around the planet in what we’d think of as the “wrong direction.” They take about two Earth years to complete their circuits.

Two new moons are closer in, go the right way, and take about an Earth year for one orbit. Those eleven moons are probably remnants of larger bodies that got broken up in collisions.

The remaining moon is less than a kilometer across, further out than the two conventional moons and has a 1.5-year orbit—and the orbit is inclined. That tilt has the weird little moon crossing the paths of those outer retrograde moons. Which means an increased likelihood of a big smash-up one day.

Depending on what survives from any such collision, Jupiter may then have even more moons. Or a couple fewer.