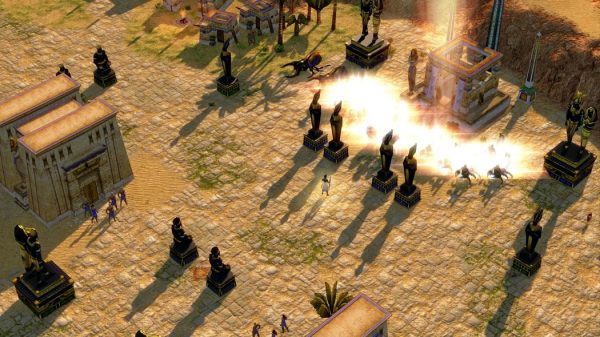 When I was a kid, my friend and I used to play Command & Conquer: Red Alert together almost every other night over a dial-up connection. Mostly, we played against AI opponents, trying to take on more and more of them as we got better at the game. The catch was that the AI was incredibly passive: Save for a few small raids, AI players would happily build ever-larger bases and armies to no apparent end. However, the moment one of your units attacked their harvester, the AI would attack relentlessly with everything it had. It was incredible to watch happen on the minimap: In the blink of an eye, the entire map would seem to lurch toward whichever player had committed the offense. It was basically the They Are Billions of the 1990s.

Once you realized the AI had such hard-coded responses, it was easy enough to manipulate and defeat. But I think I’ve always looked for games that could bring back that moment when my friend and I would watch the tide of enemy troops roll in, exchanging a few last messages about our battle plans before we were fully committed to our plan.

Lately I’ve been playing a lot more classic multiplayer RTS games. The likes Age of Mythology and a lot of Rise of Nations, plus some more modern gems like Homeworld: Deserts of Kharak. But it’s striking how few games have truly great AI opponents who can play a full game. The more you play of these games, the more you realized that RTS skirmish AI is usually some version of that single-minded Red Alert AI: It knows a couple tricks, it has a couple things it will prioritize at all costs, but it doesn’t really have any way to interpret context. One AI might teach you about surviving rushes, another might teach you about bringing down a turtled-up economic giant, but very few can actually handle all the scenarios that occur in a long RTS session. They can still be a lot of fun to play against, but after a point you’re playing against the specific quirks of the AI and not really learning the game as a whole.