Coming to a Smartphone Near You: ‘Molecular Clock on a Chip’ – Uses Rotation of Molecules for Timekeeping! #MIT #AtomicClock 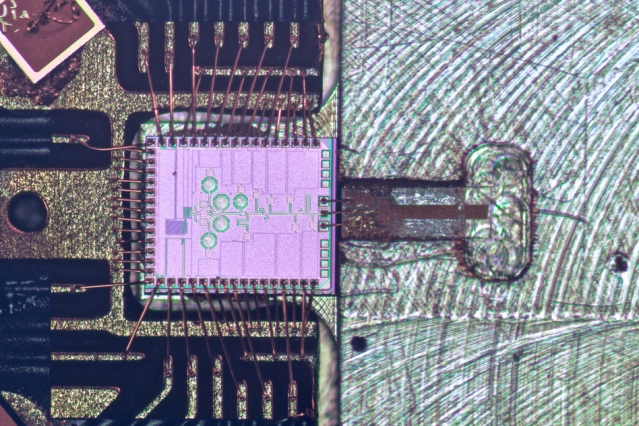 The clock transmitter chip (pink) wired to a circuit board package. Connected is a metal gas cell (right), in which a 231.061 GHz signal generated from the chip excites the rotation of carbonyl sulfide molecules. Because the peak rotation of the molecules is constant, it can be used as a reference point to keep accurate time.

This is a fascinating article from MIT about bringing molecular clocks to smartphone-scale devices:

MIT researchers have developed the first molecular clock on a chip, which uses the constant, measurable rotation of molecules — when exposed to a certain frequency of electromagnetic radiation — to keep time. The chip could one day significantly improve the accuracy and performance of navigation on smartphones and other consumer devices.

Today’s most accurate time-keepers are atomic clocks. These clocks rely on the steady resonance of atoms, when exposed to a specific frequency, to measure exactly one second. Several such clocks are installed in all GPS satellites. By “trilaterating” time signals broadcast from these satellites — a technique like triangulation, that uses 3-D dimensional data for positioning — your smartphone and other ground receivers can pinpoint their own location.

But atomic clocks are large and expensive. Your smartphone, therefore, has a much less accurate internal clock that relies on three satellite signals to navigate and can still calculate wrong locations. Errors can be reduced with corrections from additional satellite signals, if available, but this degrades the performance and speed of your navigation. When signals drop or weaken — such as in areas surrounded by signal-reflecting buildings or in tunnels — your phone primarily relies on its clock and an accelerometer to estimate your location and where you’re going.

Comments Off on Coming to a Smartphone Near You: ‘Molecular Clock on a Chip’ – Uses Rotation of Molecules for Timekeeping! #MIT #AtomicClock