Thoughts – and Measurements – on using Pennies (& Paperclips) as Heatsinks 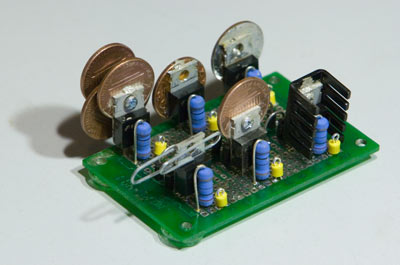 Awesome article of yore spotted over at tangentsoft.net about using pennies as heatsinks. The head-fi.org forum link in their article is missing but there’s a 2009-era snapshot on the Wayback Machine that you can still read through to see where this idea came from.

In a recent thread on Head-Fi, someone asked how well a paperclip would work for heat-sinking a TO-220 part. Much speculation ensued (much of it from your humble author), including opinions that a penny might work better, and then the argument moved on to exactly how to use the penny and so on. I eventually decided that experimentation was called for, which lead to this article.

I configured six LM317s as 0.125 A current sources propped up by silicon diodes. The diodes are remnants of a discarded idea, so their only purpose in this version of the test was as a place to clip the negative-side power lead. I then attached different heat sinks to each current source, put approximately 18 V across each one in turn, and recorded their temperature over time.

1: Surprisingly, the paperclip does better than adding a lone penny, regardless of how you attach the penny. This is probably because it puts more of the “heat sink” surface out in the air away from the regulator, and it doesn’t occlude so much of the regulator’s radiating surface. Note, however, that it’s not greatly effective. It’s good for maybe 5°C/W, no more.

2: #4’s little brother, and it doesn’t work nearly as well. In the earlier version of this test (reported in the Head-Fi thread), it came out much closer to #4’s performance, but the test was flawed and the load was lower. Either alone could explain the difference, or it could be some combination.

3: Bog standard heat sink. Available lots of places, works well, and will probably cost you less than what it’s protecting. Standard lore says parts will last twice as long for every 10° C drop, so the regulator should last four times as long in this test. Regardless of the actual numbers, it’ll pay for itself unless you’re using some extremely cheap parts.

4: This is four pennies bolted together in a fan configuration. As you can see, it did slightly better than the Aavid heat sink. It also takes more room and is harder to put together, so I can only recommend it if you need something ASAP and getting a “real” heat sink will take too much time. In a previous version of this test, the penny closest to the regulator was oriented 180° from how you see it in the picture above, to maximize contact between the penny and the regulator. I also had the second through fourth pennies aligned together. In that test, the Aavid came out slightly ahead, so fanning the pennies and reorienting the first one helped, but not much.

5: We’re giving up about 5 degrees in this test by using epoxy instead of heat sink compound. This penalty should scale linearly with the load: if you double the load, you should expect the penalty to be right around 10 degrees.

6: Soldering the penny actually gave a higher temperature than using heat sink compound in this test, but that difference is probaby within the margin of error. In the previous iteration of these tests, there was also one degree of difference, the other way around. I think the main lesson here is that it isn’t worth the effort it takes. Just use good heat sink compound and bolt it tightly, and you’ll get nearly all the benefit.