Tedium dives into the history of the Cherry switch company and how they went from microswitches to those sweet MX keyboard switches on all of our desktops.

Chery received a patent for it’s first keyboard switch in 1973. By the 1990s, Cherry was producing a wide variety of products for automobiles out of its Illinois factory and beyond—more than 3,000 components of all shapes and sizes, mostly switches but by no means limited to them.

In 2008, Cherry Electronics was sold to a German firm called ZF Friedrichshafen, a company that primarily specializes in parts for automobiles not unlike those that Cherry long produced. 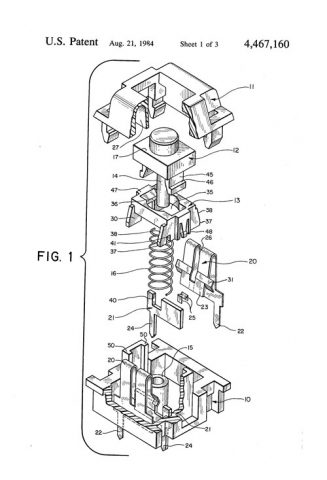 A patent for the Cherry MX. The patent expired relatively recently, and as a result, a number of competitors that produced clones of these keyboard switches have recently emerged. (Google Patents)

It was the MX switch, a device that the company first built in the 1980s, that came to define the Cherry name. Patented in 1984, the device represented a culmination of much of the company’s work on switches as a form of input. Famously available in a wide array of colored variants denoting unique qualities of the switch—most notably the low-force Cherry MX Red, the clicky MX Blue, and the tactile-but-quieter MX Brown—the keys found interest among hardware tweakers and use in mainstream keyboards. 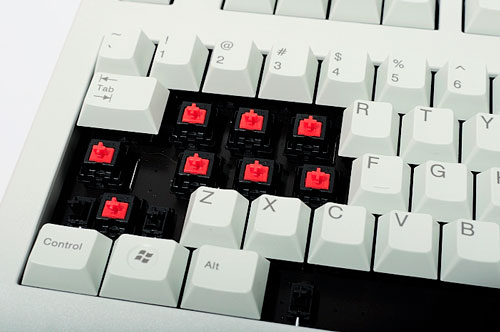 Cherry’s recent business history: By the time Cherry was acquired by the private investment firm GENUI in 2016, the news release announcing the acquisition did not mention a single thing about automotive parts. It was all keyboards, all the time, and that meant the firm was no longer a real fit with ZF Friedrichshafen.

The old switch and sensor business, producing devices used in areas as diverse as automobiles, vending machines, and power tools, still lives on, with ZF Friedrichshafen keeping that business line but rechristening it under the ZF brand name in 2016.

Cherry’s emergence as a keyboard business was so dramatic that it’s hard to blame ZF for the business-line split. In 2015, the company’s computer input business, built around the Cherry MX, was responsible for more than €80 million ($94 million) in sales.

Read the complete history on Tedium.

Which Cherry key type do you prefer? (Ed.: I have a Corsair keyboard with Cherry MX Blues) Let us know in the comments!