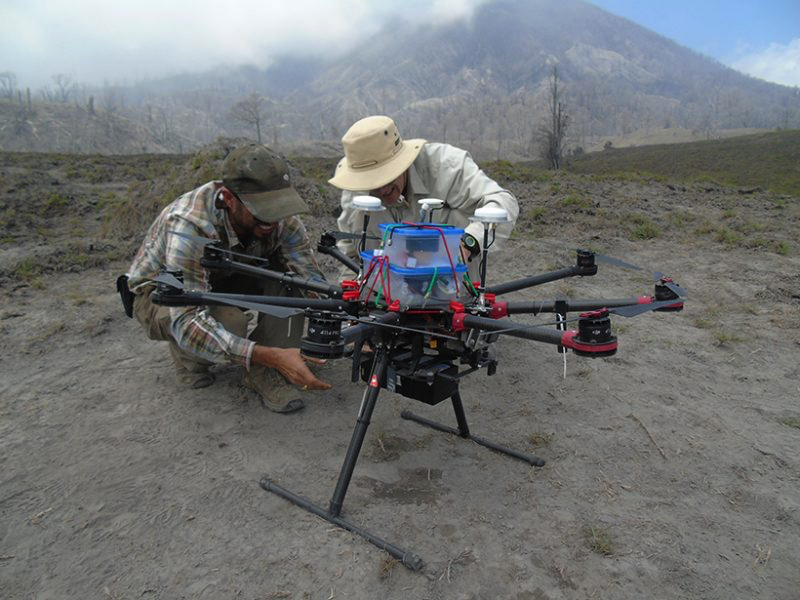 First, changes in the ratios of certain gases can indicate an imminent eruption. The concentrations of carbon dioxide (CO2), sulfur dioxide (SO2), and hydrogen sulfide (H2S) can be measured by flying the drone right into the plume of gas as it emerges from the volcano.

Second, researchers need to know which reactive species are coming out of the volcano so that the interactions between volcanoes, climate, and ozone can be better understood. These compounds contain such halogens as chlorine and bromine, and a drone hovering directly in the gas at varying distances from the source can help scientists determine how the compounds change as the plume ages.

Third, the total amount of gas being emitted can be used to calculate the exchange of volatiles between the deep Earth and the atmosphere. The emission amount can also be used to monitor volcanic activity. This is done by flying transects under the entire width of the gas plume to measure the output, or flux, of SO2.

Usually, a researcher drives or walks under the width of the plume to collect the needed transects, but limited road access and obstructions at ground level often prevent or curtail surveying such transects. The drone bypasses these problems, is faster, and can even directly measure wind speed at plume height, which is a key variable for the flux calculation.

By combining gas concentration ratios and SO2 flux measurements, scientists can also calculate the CO2 flux.