Fastest Animal in the World: A Single-Celled Protozoa 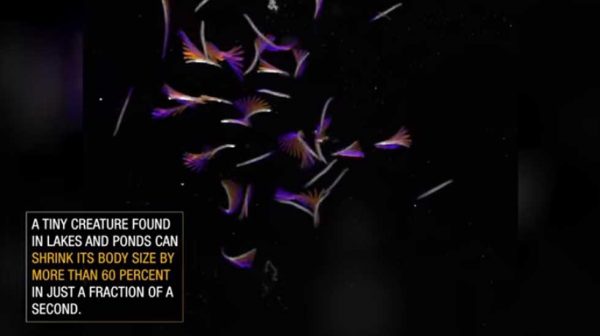 One of my favorite superheroes when I was a kid was Animal Man. He had the power to absorb and use the special abilities of any animal, and the fun of it had to do with the creativity of finding new, strange animal abilities.

Elephants are strong sure, but how about a Kangaroo Rat’s ability to live without water, or the opossum’s ability to neutralize poison, or the Pistol Shrimp’s claw clap that can stun attackers — and for speed, forget about the cheetah, the fastest animal appears to be a single-celled protozoan called the Spirostomum ambiguum.

The tiny creature has a worm-like body and is common in lakes and ponds. Spirostomum normally moves using tiny hairs on its body called cilia. The speed claim comes in a rapid acceleration it is capable of when contracting its body when it is startled. Researchers say that Spirostomum can shorten its body by more than 60% in a few milliseconds.

That allows it to go from a 4mm flat ribbon shape to the shape of a football without needing the sort of muscles that humans have. How exactly Spirostomum is able to perform this feat has been part of a four-year National Science Foundation grant that researcher and assistant professor Saad Bhamla has been working on.

The goal of that research is to find out how exactly Spirostomum can contract so quickly without any damage to its internal structure. Researchers believe that the physics and mathematics of that answer could be a boon to nanotechnology. An answer could also accelerate a new generation of robots that are barely large enough to be seen with the naked eye.

Think about fast animals and there are several that come to mind including the Cheetah. Scientists from the Georgia Institute of Technology think they might have found the world’s fastest animal and it’s incredibly small. The creature is called Spirostomum ambiguum and it is a single-celled protozoan.

Comments Off on Fastest Animal in the World: A Single-Celled Protozoa