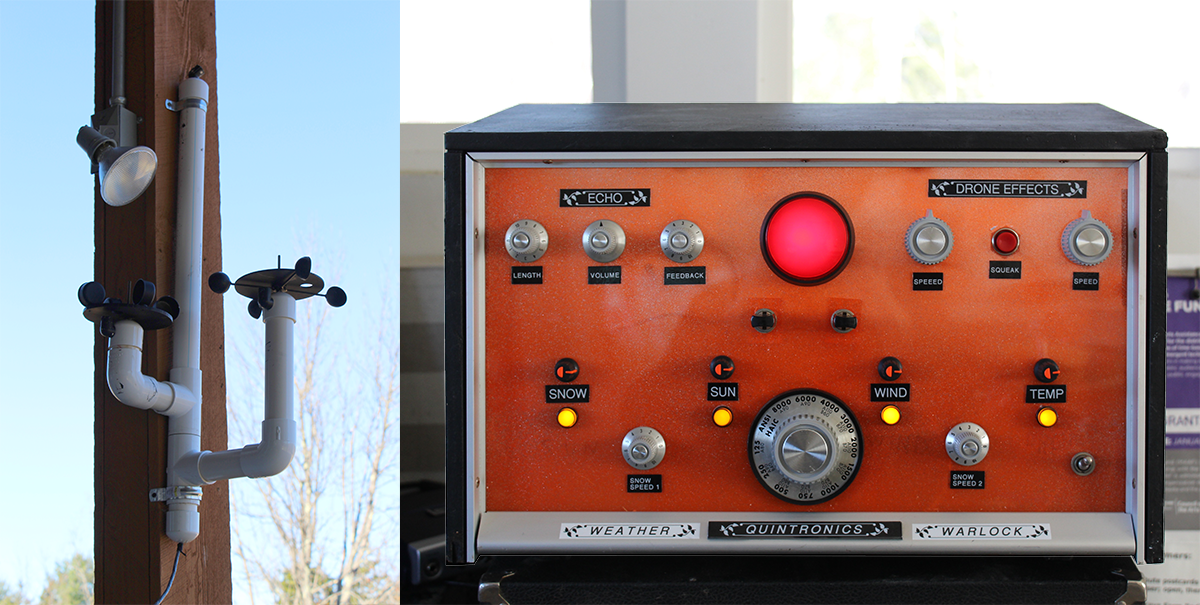 The Weather Warlock (Upstate edition) is one in a series of custom-built weather-controlled analog synthesizers. Outdoor sensors detect changes in sunlight, wind, precipitation, and temperature, with output becoming particularly dynamic during periods of rapid meteorological change, such as sunrise and sunset. At Wave Farm, Weather Warlock serves as a stand-alone installation and generative composition, an online stream, as well as an interactive instrument available to visiting artists and radio programmers.

Quintron’s previous drone synth Weather for the Blind was released in 2015 – I wrote about that project then for Makezine:

What you’re hearing is weather for the blind, a website streaming a constantly changing, never-the-same sound experience. But the really intriguing part is where the sound comes from, and for what purpose.

While an estimated 6.6 million US citizens have some form of visual disability (estimated at 285 million worldwide), and an estimated 1.3 million are legally designated blind, most are still able to perceive enough light to the degree that their circadian rhythm is established by the rise and setting of the sun. However, an estimated 100,000 people suffer total blindness, and of them an estimated 70 percent suffer a condition known as non-24, where one’s circadian clock is unestablished and free-running sleep is often a factor. While that might just sound like a sleeping pattern disorder, non-24 has other serious health side-effects ranging from headaches to lack of muscle control and even hair loss.

All of this might seem insurmountable, but being completely blind doesn’t affect your hearing. For some, the sense of hearing is amplified (think of the portrayal of Kent Cullers in the 1997 film Contact). That’s where the brilliance of weather for the blind comes in.

With two drone synths now installed in two very different states it’s interesting to get a listen to the both of them – even simultaneously – to compare and contrast the generative sounds of weather.

Comments Off on Listen to Quintron’s ‘Weather Warlock,’ an ‘analog drone synthesizer played by the weather’ | #MusicMonday #synthesizer #weather @free103point9