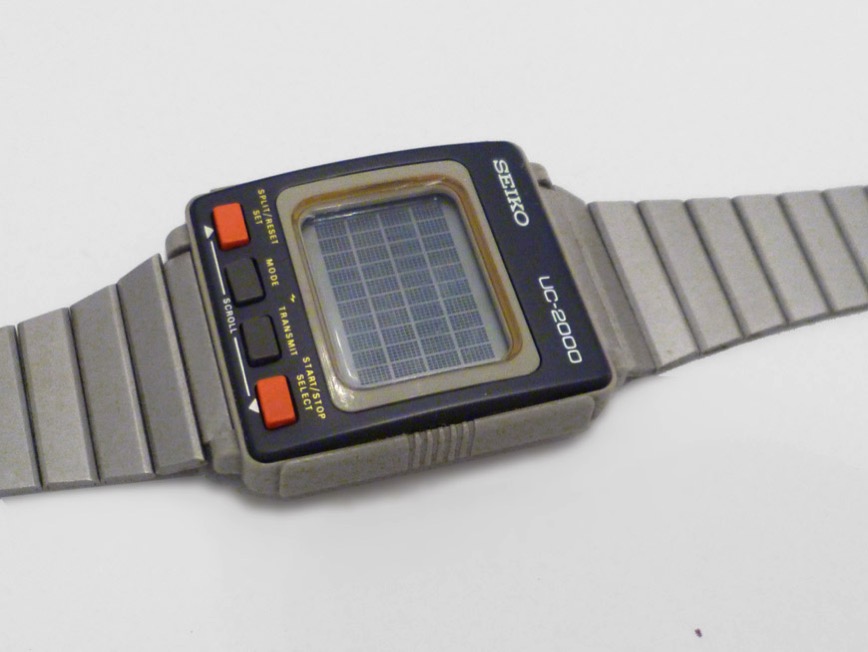 If you deem your new smartwatch the most futuristic piece of technology around, better you have a look at this strange thing dating back to the good old Eighties.
It’s the UC-2000, a wristwatch wearable computer introduced in 1984 by well-known Japanese tech company and watchmaker Seiko.

The basic object (the watch) was actually more a programmable calculator that a true PC, but things changed when it was coupled with the UC-2200 dock station. This was a quite unconventional device – provided with a small thermal printer, a keyboard, 4 KB of RAM, and a 26 KB ROM which included a Microsoft Basic programming software, a Japanese / English translator, and some games – through which the watch could be programmed and turned into a portable PC, albeit rather limited in its functions.
The docking station could also be connected to a desktop computer to exchange data to and fro the “watch”.

The Seiko UC-2000 was equipped with a 50×28 pixels monochrome LCD screen, admittedly not the best if you are passionate about high-res video games.
When not docked, the wrist computer was controlled through four large (well, reasonably large) buttons, two of which were used to play the basic video games which ran on the device.

During the ’80s, Seiko (and its subsidiary Epson) released improved versions of the watch, some of which could be directly connected to various PCs (including Apple II, Commodore 64, and IBM PC) through a RS232 interface cable, thus removing the need of a docking station; a 1985 model, the Epson RC-20, was even equipped with a touch-screen (does this remind you something?) and, at least at a first sight, looks remarkably similar to a modern smartwatch.
Yet, none of them ever achieved the success the company expected, and the glorious era of the Japanese wrist computers came to a premature end in the second half of the ’80s (at least for the time being).