Jon made this incredible wedding gift from a $11 Walmart Han Solo toy gun (SKU # 551649289) and upgraded it with an Arduino-compatible brain powering interactive audio elements (including the … ability to shoot Jar Jar).

Here’s the IR ‘blaster’ tucked into the barrel of the gun: 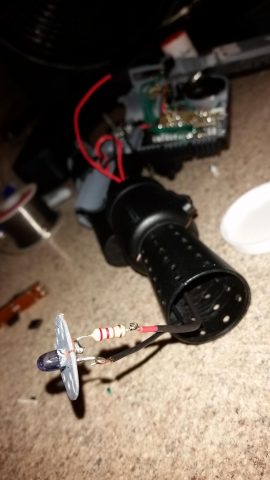 Here’s some more build shots and diagrams of the gun’s features:

Check out the full build post here on Imgur and also read more here at Pololu.

My friend and his wife both love Star Wars, so I got them a Star Wars-themed gift for their wedding. This is an album about that gift, which is basically a four-piece decorative set that consists of a Han Solo blaster and edge-lit LED displays of Boba Fett, Darth Vader, and Jar Jar Binks.

The blaster uses TV IR codes to do several things: it can shoot the LED displays (and they’ll respond by blinking and playing audio recordings unique to each character), change the color and brightness of the displays, and it can act as a TV remote by turning on or off the couple’s TV.The blaster also has a pushbutton that when pressed plays a recording of my voice impersonating Darth Vader, telling the husband that the wife is right. There are also a few Easter eggs that the couple can find by trying to control the displays with their actual TV remote.

The gift is basically half my own attempt to one-up my amazing coworker’s Harry Potter-based wedding gift to another couple ( https://secure.meetupstatic.com/photos/event/7/9/9/8/highres_455491128.jpeg ) and half me just making something that I thought was insanely amusing and cool.

Here is a link to a playlist with videos of the blaster and displays (and Easter eggs): https://www.youtube.com/playlist?list=PL_AvXBNfDUkcPNAVRrPmtHbrt-LV7FRaT

Check out the full build post here on Imgur and also read more here at Pololu.